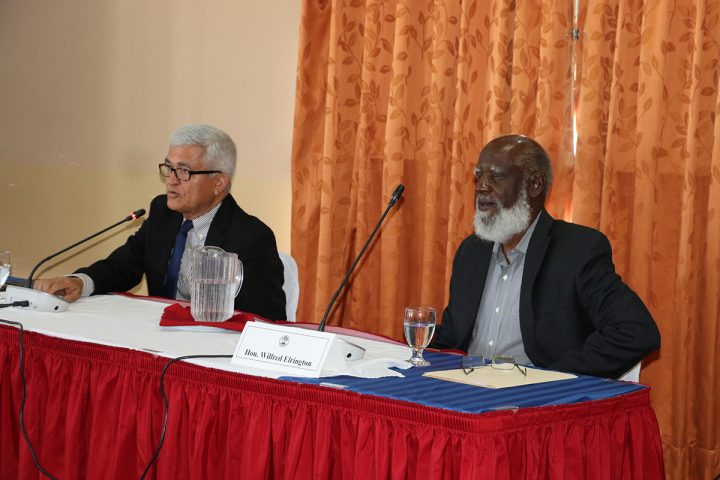 By BBN Staff: As part of Belize’s Diplomatic Week and Independence Celebrations, the third political dialogue session between the European Union (EU) and Belize took place in Belmopan on Tuesday, September 19th, 2017.

The cordial and constructive dialogue offered a platform for consultations over a broad range of bilateral, regional and multilateral issues, as well as an opportunity to take stock of progress made concerning ‘essential elements’ of the Cotonou Agreement, including respect for human rights, democratic principles and good governance.

Among discussions was the progress of the EU/Belize development partnership and renewed their commitment to partnering on health, energy and public finance management in Belize.

Minister of Foreign Affairs, Wilfred Elrington led the discussion on the recent developments in the process to resolve the Guatemalan Claim to Belizean Territory.

The EU expressed its continued support for the resolution process through the International Court of Justice and confirmed its ongoing support for the work of the Organization of American States (OAS) in the Adjacency Zone.

The EU was represented by H.E. Malgorzata Wasilewska, EU Ambassador to Belize, and was accompanied by non-resident Ambassadors from Belgium, France, Spain, the resident British High Commissioner, and representatives from the Embassies of Finland, Germany, Italy and Poland.

In welcoming the EU Delegation and attending EU Member States, Elrington acknowledged that the EU is an important development partner to Belize.

Elrington said that the Dialogue is an opportunity “to exchange information, foster mutual understanding, and facilitate the establishment of agreed priorities and shared agendas.”

EU Ambassador Wasilewska said, “I am delighted to be in Belize again to further build on our excellent bilateral relationship and to progressively discuss key regional and global issues such as security and climate change, which affect all of our citizens. We agreed on a number of action points, including further discussions on human rights and climate change. I am particularly pleased to have been accompanied by Heads of Mission and representatives from a record number of 8 Member States.

Earlier in the day the EU Ambassador and representatives from Member States visited the OAS Office in the Adjacency Zone where they received a comprehensive presentation from Magdalena Talamas, Special Representative of the Secretary-General for Belize/Guatemala Affairs and were treated to performances from young students from the Culture of Peace programmes.