Belize and Mexico mark 35 years of diplomacy with new stamps 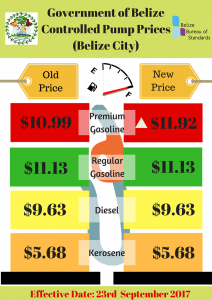 By BBN Staff: The Belize Chamber of Commerce and Industry (BCCI), in a release issued this morning, called on the government to adopt a policy that minimizes the negative impact on consumers cause by cripplingly high pump prices. Shortly after the Chamber’s release, GOB issued its own release saying that with the new arrangement under the PetroCaribe program, prices should “moderate in the weeks ahead”.

“The tax applied to this essential commodity is largely responsible for the prices being within pennies of what they were in 2014, at a time when the “landed cost” per gallon was at least 20% higher,” the Chamber said.

“These higher costs only serve to further damage the competitiveness of Belize’s private sector, and will ultimately raise the cost of living for the average consumer who will have to pay higher prices on transportation, goods and services, and the like. Additionally, the higher pump prices continue to incentivize cross-border contraband since it is common knowledge that the average global price of gasoline is at least 30% less than it is sold for in Belize,” the BCCI continued.

According to the Chamber, this ad hoc and purely revenue-centered tax measure must be replaced by a comprehensive and well- thought-out tax strategy that discontinues the administrative “price gouging” and eases the burden on consumers and businesses. This is one of the many measures required if conducting business in Belize is to remain economically sustainable, it added. “Government must not continue to only target easy-capture taxes such as fuel. It must instead place serious, growth-motivating tax reform as a top priority,” the BCCI said.

“Before implementing further tax increases and new taxes, the government must be seen to crack down on and collect taxes from those who evade payment to the tune of millions in lost revenue every year.

Continuing to avoid addressing tax evasion and overall tax reform as matters of urgency suggests that GOB is abdicating its responsibility for enabling the private sector to achieve the economic growth required to meet the needs of Belize’s population while reducing the country’s crushing debt burden,” the Chamber ended.

According to GOB, however, the increases in the pump price were not driven by any increase in import duties or excise taxes which are fixed, specific-rate taxes, and  have not changed since the beginning of the government’s financial year in April.

“While it is too early to say precisely the extent of the expected price reduction, the GOB is confident that prices will moderate in the weeks ahead,” GOB said via its release.