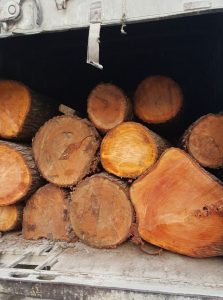 The Forest Department confiscated 34 unstamped Mahogany logs, equivalent to 1268.8 board feet, and charged the four men for “Unlawful Possession of Forest Produce” under the Forest Act of 2000 and its 2017 Amendment.

The release states that on September 27th, the men appeared before Magistrate A. Hoare in the Orange Walk Magistrate Court where Valladarez pleaded guilty to the charges.

Valladarez may face five years imprisonment if he is unable to pay the fine by January 31st 2018.

The Forest Department also intercepted Juan Reyes, a resident of Carmelita Village, Orange Walk District in possession of multiple timber species such as Negrito, Santa Maria and Mahogany. Reyes was fined for unlawful possession of forest produce on September 19th 2017.

“Our Department is seriously cracking down on this pervasive problem of illegal logging,” said Saul Cruz, Officer in charge of the Forest Department in Orange Walk.

Cruz explained that timber harvesting can be highly lucrative but illegal logging destroys our opportunities.

“It is a forest crime that threatens the future of our sustainable logging industry, our environment, the livelihoods of forest-dependent people, and our local and national economy,” he added.

The release further states that, “the passage of the 2017 Amendment to the Forest Act provides stricter penalties to match the seriousness of the offences but the Department recognized that laws alone are insufficient. As a result, the Department continues to step-up efforts by forging stronger ties with other law enforcement officials, building community awareness, and increasing monitoring and law enforcement exercises.”

The department reminds the public that the logging season is closed from June 15th to October 15th and any logging during this period is strictly prohibited.

The department  asks the public to report forest crimes to the Forest Department at 822-2079 or email at [email protected].