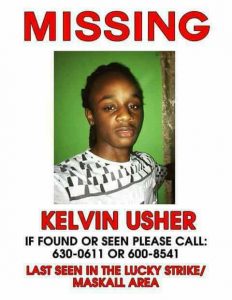 By BBN Staff: Belizeans are irate, and rightfully so, over the circumstances surrounding the strange disappearance of Kelvin Usher. His name, prayers for his safe return and support for his family has dominated social media over the last few days. Kelvin and his father, Cameron were walking along a path leading to a farm in Lucky Strike village where the Gang Suppression Unit (GSU) found and destroyed about 150 marijuana plants.

As the GSU approached the duo, shots were fired by the GSU and both the father and son ran for fear of their lives. Cameron, the father, was detained and the whereabouts or status of Kelvin, his son, is still unknown at this time. Some of the facts surrounding this case along with recent revelations by the parents and residents of Lucky Strike leaves more questions than answers in the minds of concerned Belizeans.

In the official police report issued just before mid-day on Monday, why did the GSU not report that there was a second individual who ran and escaped from the GSU? This was despite the fact that by Sunday night, the GSU knew at the highest level that a minor was involved.

This was disclosed by no other than Superintendent Andres Makin, current Commander of the GSU, indicating to the press that he was informed on Sunday night that a minor was involved.

Why did the GSU approach the duo with guns blazing? Is this standard procedure or should the suspects be warned first to stop and raise their hands? Why is the GSU saying only 4 shots were fired while the father and residents in the area say they heard more like 15 shots? And why is the GSU claiming the shots were warning shots in the air when there is evidence of bullet holes in the nearby tree trunks as well as a gallon bottle hanging on one of the trees?

Where are the expended shells and if they cannot be found who moved them? And if they were removed why were they removed? Why did the GSU not pursue (or at least claiming that they did not) Kelvin who ran from them? Is it not standard protocol or procedure to pursue a fleeing suspect? Why is the GSU saying that the incident occurred around 11:20 on Sunday morning and they processed the scene, destroyed the marijuana plants, then left to arraign Cameron in Belize City?

However, as disclosed this morning by Kelvin’s mother on Channel 5’s ‘Open Your Eyes’ programme, residents from Lucky Strike residents claimed that the GSU vehicles and officers were still in the area until after 5:00pm.

Why did police not want to accept the missing person report from the mother and in the process lose 48 hours of possible police and BDF assistance?

And as we try to sieve through these questions seeking rational answers, even more questions arise, and as Hon. Cordel Hyde tells News 7 “ Everything smelly and if it looks bad and smells bad then something is wrong.”

The case of Kelvin Usher and the GSU indeed looks bad, smells bad but let’s hope it all ends well and Kelvin Usher is found alive sometime today.