Kelvin Usher thanks everyone 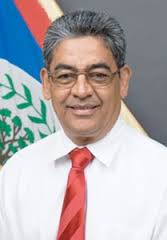 By BBN Staff: Despite support from Prime Minister Dean Barrow, Amy Forte has still not come forward to give police an official statement with respect to an alleged forgery involving the son of ex-Lands Minister Gaspar Vega.

Barrow said this week that he’d informed Forte’s lawyer that he would instruct the police to investigate the matter thoroughly, but Forte never gave the statement despite efforts by the police and the Attorney General.

He went on to say that he is certain that even without Forte’s statement, the government is entitled to cancel the conveyance,where she has challenged the signature. Barrow committed to reversing the transaction.

In August, Forte, through her attorney Deshawn Arzu Torres of McKoy Torres LLP, wrote a letter to the Prime Minister,stating that her signature was forged to facilitate a transfer of land she never owned. That land was a plot just under an acre, in the northern section of Caye Caulker.

The land documents say that Forte bought the land in May 2009, for $2,500, then sold it back to Andre Vega in 2010 for $30,000. The document purports to have the signatures of both Forte and Justice of the Peace Darlene Padron.

Padron has come out saying that the signature is authentic and that Forte did sign the document.