Beyond the Horizon 2017 continues 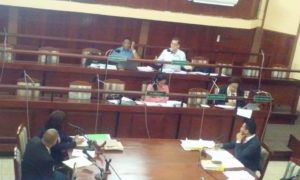 By BBN Staff: The government sent out a press release this morning informing that on Wednesday, the Senate Special Select Committee with meet at the National Assembly in Belmopan.

Prime Minister Dean Barrow had initially stated that the hearings would come to an end in November, however, in an interview with the media last week, Barrow said that if the committee would be willing to compromise by giving him a firm timeline as to the conclusion of the hearings, government would then revisit its position to provide more funding for the hearings.

“…if the committee was prepared to offer to the government a clear timeline, if the committee was prepared to say look we expect to conclude by December or January, something that is reasonable and on that basis to submit proposals for expenditure that will cover that remaining period in a reasonable fashion, government would reconsider its position and not then insist on a cut-off after November,” Barrow stated.