BNTU waiting on update from PM 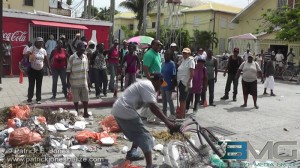 By BBN Staff: Sanitation workers of the Belize City Council were delayed in getting their end of September salaries leading to speculation that CitCo may be unable to meet its payroll in the face of its known ‘slow season’. CitCo responded by levying blame on the financial institutions leading to public finger pointing after the Holy Redeemer Credit Union (HRCU) responded with an unusual public release of its own.

Sanitation workers waited in long lines yesterday trying to collect their salaries only to be told there was no money in their accounts. The workers were expecting their salaries from last Friday, which lead to growing frustration after workers began complaining.

City Councilor with responsibility for sanitation, Dion Leslie, told the media that CitCo had made its payroll on Friday and suggested that the delay may have been on HRCU’s end. “We have no control on the time frame of how banks or credit unions process the pay, but I do know payroll was put in on Friday. I know you do have employees of the council who have gotten their pay so I don’t know what’s happening at the HRCU,” Leslie said.

Leslie, the aspiring mayoral candidate, also acknowledged it was indeed CitCo’s slow season but assured that it had sent in its payroll on time.

“To set the record straight, we attach a copy of the check dated October third, 2017, that was delivered to our office at 12:00 noon today for payment of employees salaries for Friday September 29th,” HRCU added above a copy of the Scotia Bank cheque.

When asked about the HRCU statement, CitCo again deflected blame this time suggesting the delay may have been caused by Scotia Bank. “We submitted payroll on Friday. What happened is the Council deposits payroll to its bank then the bank forwards payment to different financial institutions that employees bank with,” CitCo’s press officer told the media.