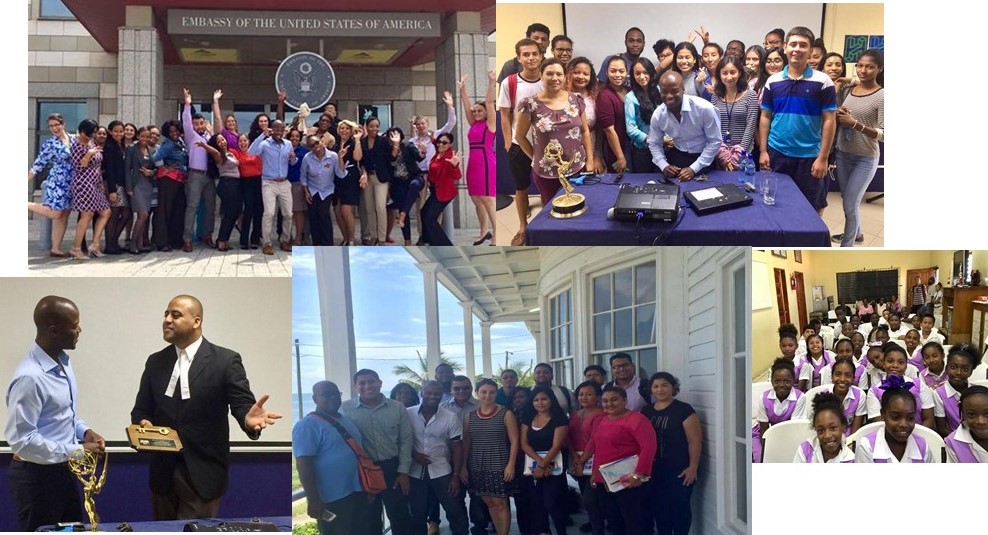 By Zoila Palma: Belizean-American journalist and news anchor Kendis Gibson arrived in Belize on Wednesday for a fun filled agenda from meeting with students to sessions with journalists and media executives.

Gibson is the anchor of “America This Morning” and “ World News Now” on ABC News. Gibson joined ABC in 2014 and had previously worked for several local and national networks in the USA.

Gibson’s visit to Belize was courtesy of the United States Embassy as part of the US Department of State’s Speaker program.

His adventure began on Wednesday, after landing in Belize City where he was greeted by local media and representatives of the US Embassy. He then visited students at the Samuel Haynes Institute of Excellence and motivated them to set goals in their lives and work arduously to reach those goals.

On Thursday, Gibson facilitated a session with government of Belize communications specialists with spirited discussions on investigative journalism and ethical reporting. He was then hosted at the Belmopan Comprehensive school and the University of Belize for a captivating lecture on journalism.

Getting his morning workout for a new day, Gibson was up from 4 a.m. on Friday in Belmopan where he prepared for another adventurous day. He appeared on the Love FM and News 5 morning shows where he discussed the importance of journalism and the news media.

The students of St. John’s College also had the opportunity to meet Gibson.

Yesterday, Gibson’s visit concluded with an interactive session with Belizean journalists on investigative journalism. Among key topics discussed were being fair and balanced in reporting, keeping news in perspective, abiding by laws, vetting of news stories, ethical reporting, journalists sources and a holistic view of how the media in Belize can improve in reporting the news.

Gibson’s visit wrapped up with a meeting with the Minister of Foreign Affairs, Wilfred Elrington and Ambassador Patrick Andrews, to discuss his visit to Belize. His last stop was getting some crispy conch fritters!

BBN extends gratitude to the US Embassy and Kendis for providing this enlightening opportunity for Belizean journalists.