GIS Training for BDF and BCG

Social media is helping to expose police brutality in Belize 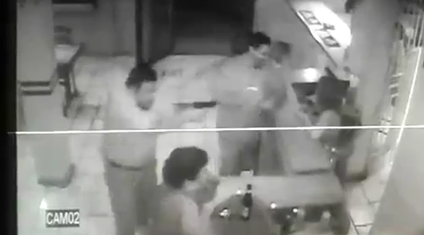 By BBN Staff: Over the last few months, many videos have been surfacing on social media exposing police brutality in Belize.

Recently, two videos have surfaced on the Internet where two police corporals are involved in separate incidents in San Ignacio Town.

Last week, a corporal police officer attached to the Major Crimes Unit in Belmopan was caught on camera entering a Chinese Restaurant in San Ignacio Town with his gun in hand pointing it to a woman behind the counter, then putting it on the head of a man that was drinking a beer at the establishment.

The officer then puts his gun away, hugs the guy, and then turns to the female behind the counter and tries to assault her.

Commander of Professional Standards Branch, Chester Williams indicated on social media that the incident was under investigation by his office.

Today, a new video was circulating on social media which shows another police officer beating a homeless man in front of a Chinese Store near the Welcome Center in San Ignacio Town.

Up to now, there has been no official reports from police on these incidents.

Meanwhile, media houses in the country continue to boycott activities of the Belize Police Department. This comes after police failed to issue reports on major crimes in Belize and are consistently declining to have press briefings with the media about several crimes that have happened in the country.

BBN notes that several crimes in Belize have also been reported by the media without official reports from the Police Department.

At a press conference on Wednesday, Prime Minister Dean Barrow assured the media that the disruption of relations between the police and the media would be worked out.