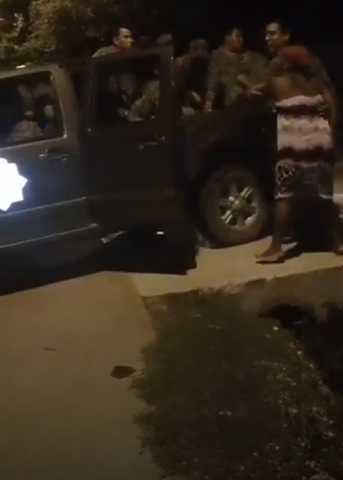 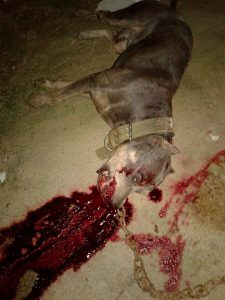 By BBN Staff: A police operation tonight in the PIV area of Belize City ended in controversy with police firing as many as six shots to disperse a hostile crowd and residents claiming excessive use of force and abuse by police.

According to residents who spoke with BBN, police visited the area earlier tonight around 6:00 and performed a search on a home on Croton Lane. Residents say that police took one man into custody and abused him in front of several people, kicking him and putting him in the back of a police mobile.

Residents further claim that police then stopped at another home and tried kicking in the front door to get in but when they could not, they killed a dog that was chained on the veranda. It is further alleged that the cops dragged the dog down the stairs leaving a trail of blood behind.

Police returned to the area again, this time after 8:00 and a resident in the area streamed the events live to Facebook. From the live video, police can be seen taking several men into custody and escorting them to the back of a police mobile as police surround the vehicle.

The already angered residents can be heard making threats to police on the video and as the police truck drives away six shots are heard as residents scramble. In the video, one man can be seen grabbing a child and taking cover. It is unclear, due to the angle of the video, whether or not police fired the shots in the air.

A resident also told BBN that police fired the shots after a resident threw a bottle at the officers because the police allegedly ran over his brother’s foot when they arrived on the scene. The man whose foot was reportedly ran over by police was allegedly taken into custody.

Residents say they are shaken and worried that the aggressive officers may return to the area.