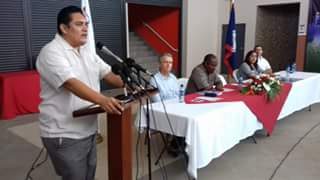 By BBN Staff: The Police Department, today, launched its new Addressing Crime Together (ACT) initiative at the Raccoon Street police station with the Commissioner and Minister with responsibility for police on hand.

Minister with responsibility for police, Elodio Aragon, later said via his social media account, “Crime is a scourge which must be eliminated at all costs and this Administration and my Ministry will spare nothing to ensure that we keep the citizens safe especially the law abiding ones.”

“Our personnel have been properly briefed and we will be fair but firm. It is an intelligence led operation which will be targeted,” he said.

Aragon said key underworld players will be placed under the police microscope and will be dealt with to the fullest extent of the law. He explained that it will also encompass a mediation component, under the watch of ACP Chester Williams, which will be made available to those persons who wish to make use of this facility.

Aragon explained that it will not be a mediation between gangs and police, but rather to address issues among gang members.

“We will make the necessary crime fighting tools available to our personnel. We have already acquired 15 new vehicles assigned to this Ops and other things including body cams and communication equipment will also be acquired,” Aragon said.