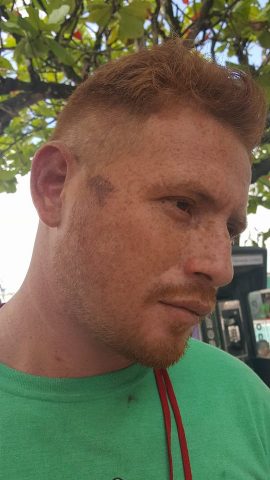 The young men from Santa Elena and Esperanza told us that they were socializing in front of a popular night club on Hudson street in San Ignacio town early Saturday morning when they claim they were attacked by a group of 5 uniformed police officers.

The young men allege that they were standing together, drinking, when the group of officers approached them and asked them to throw away their drinks. They further allege that without warning, the officers beat them badly, choking and punching them.

The men also further allege that a passersby who was taking a video of the incident was pursued and roughed up being choked by the officers, who allegedly took away the phone and deleted the video. The person who took the video, as well as others around at the time, were allegedly taken to the San Ignacio police station and detained.

One woman who was reportedly detained in the incident was released on Sunday and today, the two other young men were reportedly charged at the San Ignacio’s magistrate’s court for wounding.

BBN spoke to Kennedy Gentle Sr., the father of one of the young men and former police officer, who told us he is disappointed with the behavior of the “rogue” cops.

“I am a former police officer and I support the police, I want to make that clear, but when they do wrong, I will go against them. San Ignacio has some good police but they have some rogue police that beat people and chance them. They went too far, beat my son and hold him there without taking him to the hospital…This is every weekend that they are beating people, we are getting tired of it…. They will turn good citizens into criminals. They are going too far. We are hearing about police brutality every weekend here,” Gentle said.

Gentle demanded that the authorities deal with the matter. “I want the Commissioner of police and the officer in charge understand that enough is enough. We are tired of the brutality and this needs to stop,” he said.

BBN has sought a statement from police on the matter but no response has been forthcoming as yet.