Did Tiger Aggregates have license for Santa Cruz explosion? 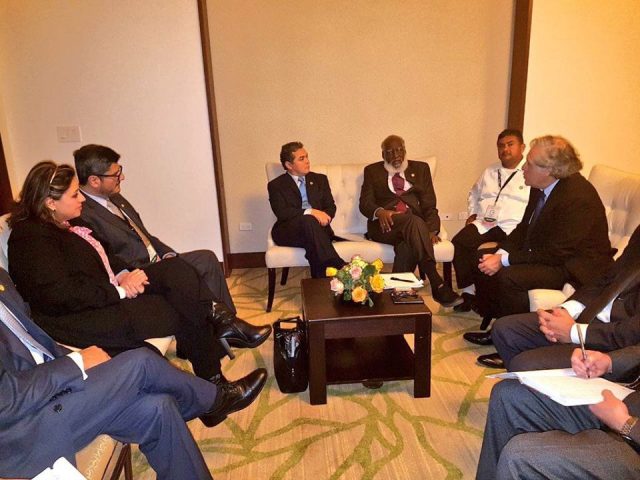 : Foreign Minister, Wilfred Elrington; the Guatemalan Foreign Minister, Sandra Jovel and the Secretary-General of the Organization of American States (OAS), Luis Almagro met in Panama on December 13th in the margins of the L Meeting of Heads of State and Government of the Central American Integration System (SICA).

In this first bilateral meeting since Jovel took office, both Ministers took the opportunity to reiterate commitments made under the Special Agreement of 2008 on the possibility of going to the International Court of Justice (ICJ), and appraised each other on their preparations for a referendum and the promotion of public awareness on the subject.

Elrington and Jovel underscored their commitment to actively re-engage at the bilateral level in promoting confidence-building measures, including the implementation of cooperation agreements between the two countries.

Both Belize and Guatemala’s foreign ministers expressed the need to prevent incidents and undertook to maintain close contact and ensure that constructive measures are developed to avoid tensions and promote cooperation between the two countries. They recognized the important role of the OAS and the international community in these efforts.

Secretary-General Almagro reiterated full support through his good offices and that of his organization in the strengthening of the OAS Office in the Adjacency Zone and in mobilizing international support for the process. In an effort to engage with international partners, they agreed to arrange to meet with the Group of Friends in the near future.