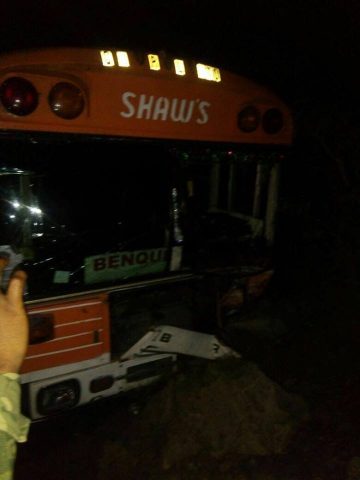 By BBN Staff: A road traffic accident on the George Price Highway has claimed the life of one man.

According to police reports, around 7:58 p.m. yesterday, Hattieville police visited an area between miles 24 and 25 on the George Price highway where cops observed a Shaw Bus with extensive damage, off the highway facing in an eastward direction.

About 150 feet away from the bus, cops saw a green Isuzu Rodeo also with extensive damage to the top portion of the vehicle in some nearby bush.

Initial investigations revealed that the Shaw’s bus was traveling from Belize city towards Belmopan and collided with the Rodeo, which was going in the opposite direction.

The bus was driven at the time by Audomario Chan, 41.

He received injuries to his body and was transported to the Karl Heusner Memorial Hospital (KHMH) for medical treatment.

Lenny Smith, 27, was also injured in the bus and was transported to the KHMH via a BERT ambulance.

Albert Garnett, the driver of the Rodeo, died on the spot due to severe head and bodily injuries.

His passenger Earl Hamilton, 55, received some injuries and was transported to the KHMH as well.