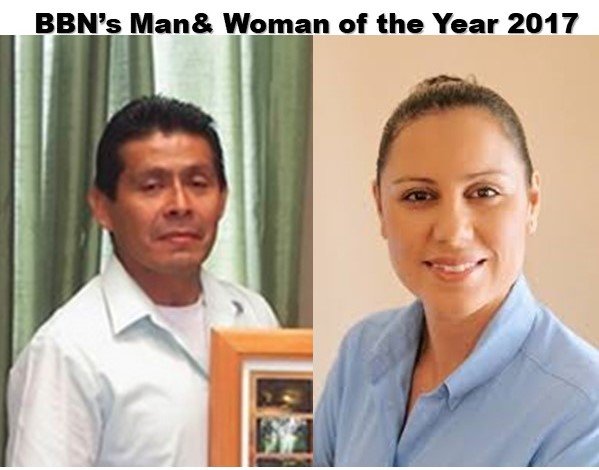 By BBN Staff: As we prepare for 2018, BBN takes this time to reflect on the year that was by celebrating the efforts of Belize’s diligent conservation community, selecting Oceana Belize’s Vice President, Janelle Chanona, and Friends for Conservation and Development (FCD) Director, Rafael Manzanero as our 2017 Woman and Man of the year.

Both stewards of conservation saw important, if quiet, victories this year. After months of publicly calling out the government of Belize for dragging its foot on implementing legislation to ban offshore oil activity in Belize, Oceana’s efforts paid off in early December when the Petroleum Operations (Offshore Zone Moratorium) Bill 2017 was passed with bipartisan support.

The bill effectively makes it an offense to conduct oil exploration or extraction activities in Belize’s territorial waters. The act also prescribes a fine of up to $3 million, imprisonment of up to two years or a combination sentence for anyone who commits an offense under the act.

The Belize Coalition to Save our Natural Heritage and Oceana, at the time, both said that the legislation, which comes after years of advocacy, a blocked referendum, and court battles, represents a victory for the people of Belize and for democracy.

“As a nation, we would never have gotten to this point were it not for the enduring participation of the Belizean people. That engagement reflects the national consciousness that we are ‘people of the reef’. We will ensure that the world knows that the Government and people of Belize are serious about safeguarding our heritage and protecting our collective future from the reality of offshore oil,” Chanona said about the passing of the moratorium.

According to economic valuations conducted by the World Resources Institute in 2009, every year Belize’s coastal and marine ecosystems contribute more than a billion dollars to the national economy through just three goods and services: tourism, fisheries, and coastal and shoreline protection. In the wake of the Gulf of Mexico oil disaster in 2010, Belizeans learnt that their entire offshore area had been parceled out and sold as concessions to oil companies. After an attempt to trigger an official referendum by Oceana and the other members of the Belize Coalition to Save Our Natural Heritage was derailed, in February 2012 some 30,000 citizens participated in the groups’ unofficial vote dubbed, “The People’s Referendum”. More than 96% of participants voted against offshore oil activity.

“If enacted, this bill will become ‘The People’s Law’ because it recognizes that Belizeans have remained steadfast in their opposition to offshore oil. The enduring participation of the public has meant that this issue has survived time as well as all the traditional divisive tactics,” shared Oceana’s Vice President for Belize, Janelle Chanona.

A legal challenge by Oceana and other members of the Belize Coalition in 2012 rendered all oil concessions null and void. In June 2015, the Government declared that a “policy based” moratorium was in place. But when seismic testing was secretly approved without an Environmental Impact Assessment in October 2017, public outcry once again reached a fevered pitch. The backlash led to the studies being immediately suspended on October 20th, 2016 and subsequently canceled in January 2017. In August 2017, in response to calls to ensure transparency in the decision-making process regarding offshore oil activity, Belize’s Prime Minister, Rt. Hon. Dean Barrow publicly committed to introducing legislation to enshrining an indefinite moratorium.

And while Oceana led the charge to protect Belize’s territorial waters from impending danger, FCD fought the battle to protect the Chiquibul Forest Reserve on the country’s western border. As a result of FCD’s tireless efforts and the bravery of its limited but capable rangers, Manzanero reported that the Chiquibul has seen less Xate extraction, poaching and illegal logging in the Forest over the last year. This is welcome news, as pillaging of Belize’s precious resources in the Chiquibul forest has amounted to millions of dollars in losses. But for every brief moment of triumph, Manzanero noted, the vast Chiquibul forest presents another challenge.

Manzanero said even though FCD has seen success in some areas, the organization has observed notable degradation of the landscape, as well as evidence of increased gold panning and now even cattle ranching. The intrusion into the Chiquibul forest by Guatemalan farmers has gotten  worse over the years, with illegal clearing and farming now happening on such large scales that the lush flora and fauna are being destroyed by the acres, as compared to the small plots that were the norm about a decade ago.

FCD has already responded to this growing concern by signing an agreement with its Guatemalan counterpart, Asociacion Balam, to reduce those occurrences. As part of the agreement, Asociacion Balam has formed a Council for Land and the Environment in southern Peten to address the socio-economic and environmental issues of the Guatemalans who are the likeliest to enter the Chiquibul.  Alternative sustainable livelihoods are being developed and enforced in 11 communities in Guatemalan communities near the border with Belize.  More than 1,300 of those people have received seed funding to begin farming on Guatemalan soil.

The groups also produced a set of 13 recommendations, which include that both the Belizean and Guatemalan governments resume bilateral talks; and commit to implementing 13 collaborative agreements both governments signed in 2014. FCD pointed out that to help reduce the incursions, several strategies have been implemented over the years, including environmental law and environmental education.  The two non-government organizations also recommended that the government of Belize continue financing FCD’s budget to monitor and protection the Chiquibul.

Conservation efforts often happen without much fanfare but for the outstanding continued efforts put forth by Oceana and FCD with both Chanona and Manzanero at the helm on opposite ends of Belize’s frontier, BBN salutes our 2017 man and woman of the year.

© 2017 – 2020, BreakingBelizeNews.com. This article is the copyrighted property of Breaking Belize News. Written permission must be obtained before reprint in online or print media. REPRINTING CONTENT WITHOUT PERMISSION AND/OR PAYMENT IS THEFT AND PUNISHABLE BY LAW.