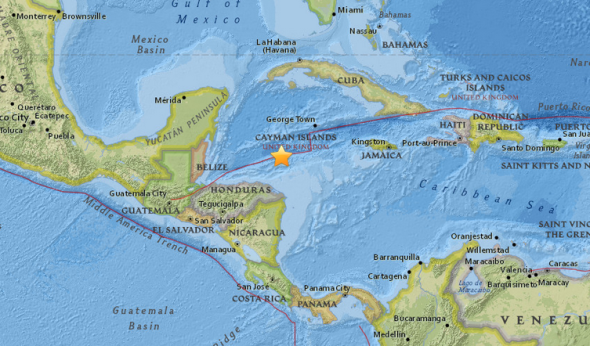 By BBN Staff: The National Emergency Management Organization (NEMO) issued an advisory a short while ago advising the Belizean public that Tsunami waves are possible after an Earthquake measuring 7.8 on the Richter Scale struck just off the Coast of Honduras near to Swan Island at 8:51 PM this evening.

A Tsunami Watch is in effect for the entire coastline of Belize from Toledo up to Corozal District. NEMO advises that the threat to the country is from storm surge type waves which are likely to affect property and life. Priority action for the citizens of Belize is for people on the coast to move up to a second story concrete building.

The release states that “NEMO is in close communication with the Met Service, which is the Tsunami Focal Point for Belize”.

All NEMO Coordinators have been tasked to respond and notify the general public within their areas of responsibility to move away from the coastline and to observe if water along the coastline is retreating or receding back out to sea. This, NEMO informs, would be an indicator that a tsunami is likely to follow.

The expected time of a possible tsunami would be around 10:30 tonight according to the Pacific Tsunami Warning Center.

According to NEMO, the various coordinators are already notifying people on the Cayes to seek shelter in second story concrete buildings. In addition, the Department of Transport is being asked to check all bridges, and to stop and control traffic in those areas.

Everyone is advised to minimize movements in vehicles, especially across bridges.