$10,000 reward for information on killing of Belize jaguar 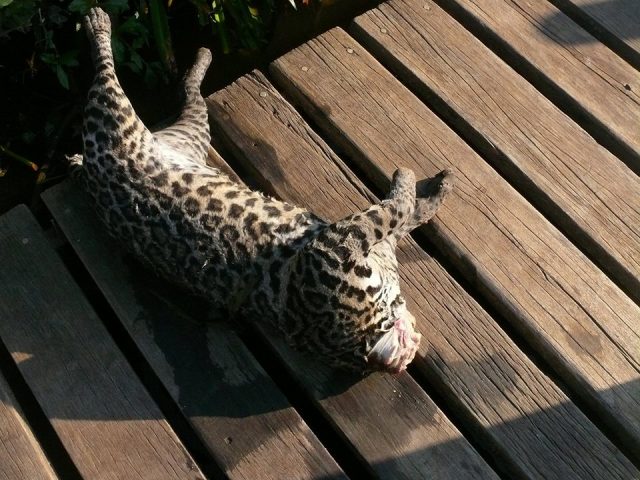 
By BBN Staff: The Ministry of Agriculture, Fisheries, Forestry, the Environment, Sustainable Development and Immigration today issued a statement stating that it regrets and is alarmed over the massacre of a young male jaguar found floating in the Belize River yesterday.

This is the second incident in recent weeks where dead jaguars were found floating in waterways in or near Belize City.

The incident revealed a decapitated jaguar which was shot, killed and dumped into the Belize River.

An enforcement operation in Placencia Village has also yielded confiscations of jewelry made from jaguar teeth.

The Ministry reminds the public that it is illegal to hunt, kill or sell endangered cat species such as jaguars, margays, ocelots, and pumas.

The public is asked to report wildlife crimes to the Forest Department. Such crimes will be investigated and persecuted to the fullest extent of the law.

For information leading to the arrest and conviction of persons involved in these two recent jaguar killings, a reward of $10,000 will

Jaguars are charismatic species that function as the top predator in the Belizean ecosystem.  They play an extremely valuable role in the healthy functioning of our natural ecosystems, upon which our environmental welfare and tourism industry depend.  Belize has the only dedicated jaguar preserve and is a world leader in jaguar conservation.

The country values each jaguar as contributing to the economic potential of our tourism industry.  Given the cruel nature of the death of the animals, the endangered status of the species, the importance to the environment and economy, and the respect Belizeans have for their wildlife species, the Ministry will raise the penalties for this and other wildlife crimes beyond the current $10,000 or 12 months in prison.

The Ministry is also informing the public that jaguars are among the big cats that are the most recognized globally.

However, they are under many and varied threats, mostly caused by human activities, which are causing their populations to decline.

This year, Belize along with the rest of the world will celebrate World Wildlife Day on March 3rd under the theme “Big Cats”.

The goal is to continue emphasizing the importance of jaguars and other big cats, and their alarming decline due to habitat and prey loss, poaching, and illegal trade.