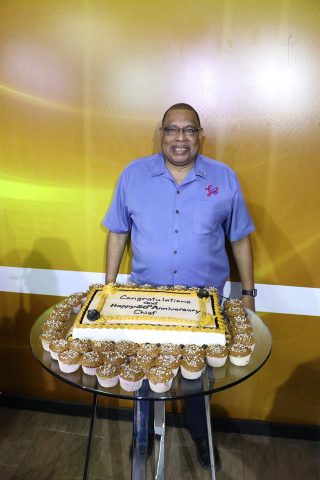 By BBN Staff: Rene Villanueva Sr., or known simply as “The Chief”, the founder of Love FM, is celebrating a noteworthy career milestone today: 50 years at the helm of media in Belize.

Villanueva was born in Belize City on April 1st, 1950 to mother, Helen Villanueva. During his childhood, he attended school in Belize and in Honduras. In Honduras, Villanueva learned Spanish at Escuela República de Chile in Puerto Cortes, Honduras. His mother was the Pastor of the Zion Methodist Church. At age 14 he decided he would remain in Honduras instead of coming back to Belize.

He got his first job in Puerto Cortes as a messenger at Agencia la Curacao. He started working in radio at the HRQN La Voz del Atlántico at the age of 16, where he hosted a show named Panorama along with his friend Miguel Recarte. When he was 17, his mother took the family back to Belize, to spend time with the family and during this trip, Villanueva decided to stay in Belize even though he had already enrolled at the Instituto El Hatillo in Tegucigalpa, to study to become a preacher like his mother and grandfather.

In Belize City,he met with Prime Minister George Price and asked for a job in the new capital, Belmopan. Premier Price asked him what he had done while in Honduras, and Villanueva told him about his work at the radio station in Honduras. The Premier then responded that “Radio Belize needs a temporary Spanish continuity announcer”,  and that was the only job he had to offer. Villanueva accepted and thus began a remarkable and distinguished career in media and the broadcasting industry.

After occupying almost every position in the radio station and studying at various institutions abroad, at the age of 32, he became the Chief Broadcasting Officer with responsibility for all broadcasting for the Government of Belize, a position he held for ten years despite changes changes in government.

He led the successful transition of Radio Belize from a government department controlled by a minister to the Broadcasting Corporation of Belize in 1990, thereby marking the freedom of the government controlled broadcasting system. He was named General Manager of the newly formed Broadcasting Corporation with a two year contract, at the end of which he left to form his own media organization, RSV Ltd., which are the initials of his first name and his wife Susan.

RSV Ltd. began in the lower flat of Villanueva’s home with one transmitter which covered Belize City and the surrounding areas. The company has grown from one radio station Love FM, to include Estéreo Amor which caters to the Spanish speaking audience, MORE FM, which caters to the younger audience, and Love Television, a production and Entertainment company. Love FM is the only Radio Station in Belize that has nationwide coverage.

BBN congratulates the Chief on an outstanding career and wish him the best as he continues to keep Belize informed.