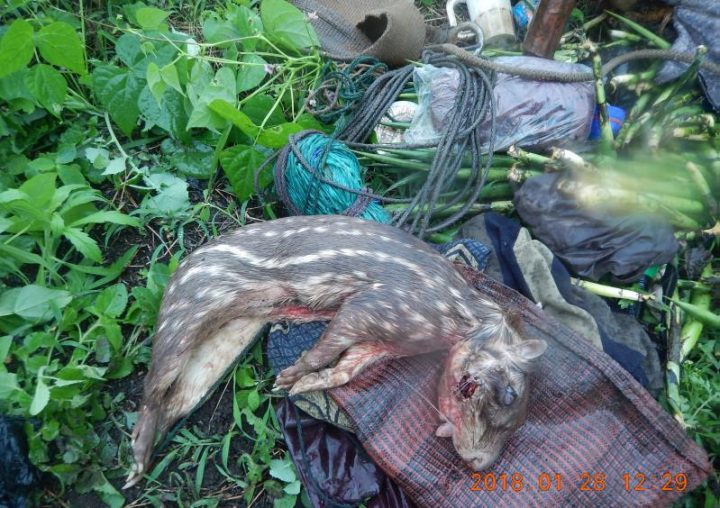 By BBN Staff: Rangers from the Friends for Conservation and Development (FCD) were on a joint patrol on Sunday, January 28, 2018, and around noon time, they came across three hunters near some corn fields in the Chiquibul National Park. The joint patrol consisted of members of the Belize Defence Force and Special Patrol Unit and the Police Department.

The hunters were identified to be Guatemalans: Roni Alexander Lopez, Abraham Esteban Depaz and Encarnacion Depaz, all from Dolores, Peten Guatemala.

The three men had in their possession 3-20 gauge shotguns.

The men were found with a horse and a dead gibnut.

Encarnacion Depaz told authorities that he had hunted the gibnut.

The men were interviewed and confirmed to the rangers that they were all hunting wildlife in Belize.

The men were handed over to the San Ignacio Police Station on Monday, January 29, 2018 for charges to be levied against them.

FCD says that hunting of wildlife in the Chiquibul Forest has been prominent nearby the western flank of the Chiquibul National Park.

According to FCD, in 2016, their report noted that less hunting evidence was recorded compared to 2013 which may be attributed to the dramatic decrease of illegal xate extraction plus the cessation of illegal logging in the Chiquibul Forest.

Later this year, FCD expects to conduct the third wildlife survey and diagnostic of game species in the region in order to validate the status of species such as great curassows, brockett deer, white lipped peccary and gibnut.