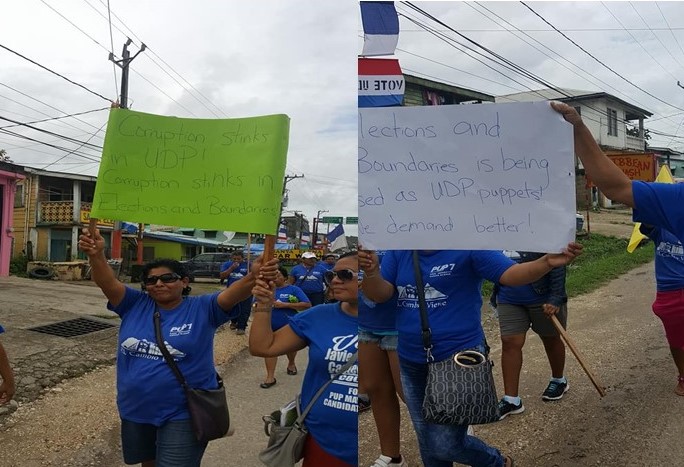 By BBN Staff: Yesterday morning, supporters of the opposition, People’s United Party held a protest in front of the Elections and Boundaries office in Santa Elena town.

The Cayo Central PUP committee were objecting to 33 voters who reside in San Antonio and Georgeville villages and were transferred to Santa Elena town to vote in the upcoming Municipal elections.

Over 100 supporters walked in front of the office with placards that read ‘Stop the corruption now’ and ‘ Stop the illegal transfer of voters’.

According to PUP Mayoral candidate, Marconi Matus, the officers at Elections and Boundaries failed to investigate the addresses of the 33 voters and approved their transfer illegally.

The objections were taken up at the San Ignacio Magistrate’s court last week. The PUP claimed to have concrete evidence that proved the voters reside in the villages, however, their names were allowed to remain on the voters list which makes them eligible to vote on March 7, 2018 in Santa Elena town.

Matus said voter fraud must cease: “They illegally transferred people from the villages to Santa Elena so that they can vote here and those people that we objected to did not appear in court and they still won the case. This is voter fraud and corruption because they live in the villages not in Santa Elena town. It is corruption and it must stop now.”