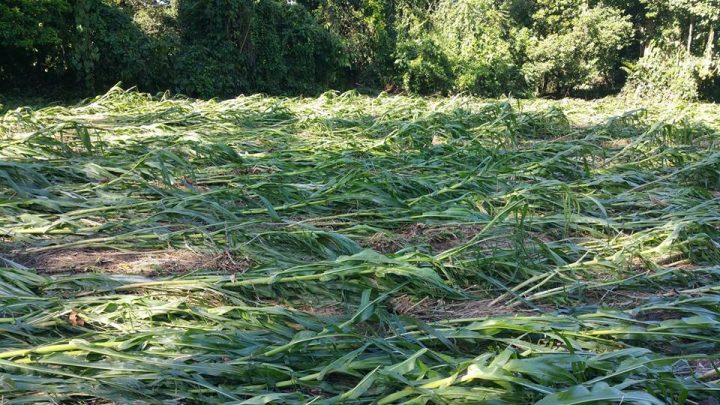 By Valentino Shal: The village of San Benito Poite has found itself in desperation as acres of corn and beans have been washed away by unexpected flood waters last Thursday.

The nearby Poite river usually floods but in the rainy season and so farmers who have their “matahambre” corn crop on the banks of the river were not expecting any flooding in February. This particular corn crop is expected to hold them over their next crop which they usually harvest around August or September. At this time of the year they usually start preparing land for that crop later in the year.

If you understand the subsistence economy of most of the Maya communities, you will note that each of the corn crop they harvest is expected to hold them over until the next crop is ready. The acres of beans they lost is also part of this cyclical process. Beans is usually sold in order to have cash on hand in case the corn crop does not sufficiently hold them over; the cash from the sale of beans then is used to “smooth” their consumption.

The crop that has been lost in the floods last week means that households in Poite are looking are real food shortages as they will not have the corn and beans harvest they expected. The loss of such staple foods is real shock to the household economy. Corn is not only for human consumption but also serves as feed for small livestock. They are now at a loss as to what to do as many other households have been affected and are in the same desperate position. The overall crop and food output of the entire community is severely diminished.

San Benito Poite is not the only village affected. Similar reports have been coming out of other villages including Santa Anna, and Blue Creek. Unfortunately, this situation is not expected get any better with the onset of the impacts of climate change in these Maya communities. This time the impact is due to excess rainfall. The next incident could very well occur later this year with excess heat and drought as global temperatures keep rising.

For subsistence farming communities, who can be found mostly in rural areas these threats from climate change could very well lead to increased poverty and possible starvation in the future. While there is a national climate adaptation strategy for agriculture, the strategy is focused on commercial agriculture. These subsistence communities need a separate strategy. Unfortunately, there isn’t any at this time. The impact of food shortages could very well change the character of these communities in undesirable ways. The responsible government agencies will need to visit these communities to bring some relief but what is more important is to jointly craft a strategy to help subsistence households adapt their farming practices to the effects of climate change. The time to do so is now.