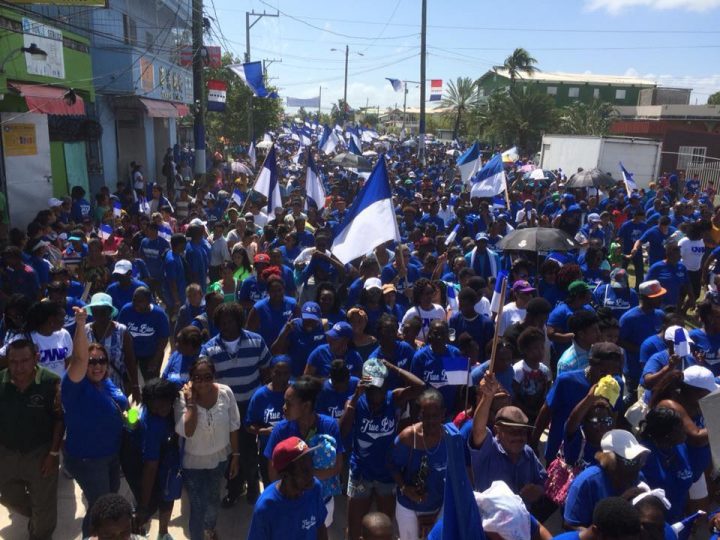 By Richard Harrison: Yesterday the Peoples United Party (PUP), after losing every election since 2003, poured into the streets of Belize City for their twice postponed National Convention to endorse their leadership for the various functional offices of the party….with the Hon. John Briceno as party leader.

Estimates are that 10,000 to 15,000 persons bussed into the old capital creating what some referred to as the blue tsunami….and the parade was impressive for its shear numbers and blueness.

With municipal elections only 3 weeks away, this mass movement of people raises the PUP spirit of hope for more victories…it gives them momentum.

Currently, the PUP only controls one of nine municipalities….Orange Walk.

This crowd came from all the 31 electoral constituencies….including rural voters who will not vote in the municipal elections….so while it is a massive showing that the blues are revved up across the country….it remains only a hope that this will translate at the level of each municipality….the desired result for the PUP being that they pick up 2 or 3…..4 or 5 more municipal victories.

If the PUP manage to win 3 or more municipalities…it could be a sign that they could sail on to victory at the next general elections for central government….which can be called at anytime before early 2021, with only 30 days notice required by law.

In this case, the ruling UDP can be expected to ride out their time to 2021….and it may mean a consolidation of leadership for the PUP under Briceno…..this is his Waterloo.

If, however, the PUP manages to win only one municipality….and the UDP again wins 8 handsomely, even if with reduced margins….then it could mean that the electorate is not ready for change at the national level.

In such case, the ruling UDP could decide to spring an early general election later this year or early next year….and the PUP could see another change of leadership.

Belizeans are impressed by money….the PUP seems to have lots of it this time around…wherever it came from? In this substance, the UDP is up against a much more formidable opposition….especially since the money circulating in voters hands has been sequestered….such that at what should be the peak of the tourist season…things are very slow across the country…which suggests that there is general coalition among the capitalists of Belize to choke out the ruling party for a swing of the political pendulum towards the blue opposition.

It is left to be seen if the next three weeks will evolve into debates and discussion of development plans….or whether the race will remain a money-driven, chest-thumping match. Both parties have so far avoided the issues like a plague.

The ultimate test will be the election day machinery….the UDP has been winning since 2003 based on a far superior election day muscle and organization….yesterdays PUP MASSIVO does nothing to boost their morale…indeed it must have sent shivers down their spine….the two gladiators have three weeks to sharpen their swords…they will both go for the kill on March 7.