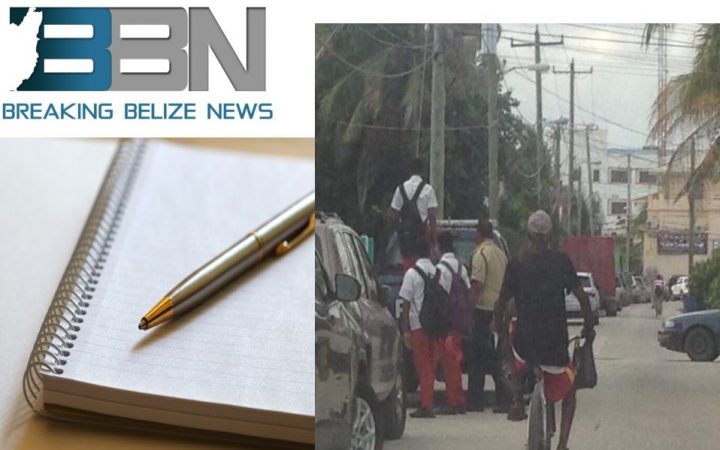 By Lisa Shoman:  It happened around 4 pm, last Thursday afternoon on Cran Street on Northside Belize City. A police pickup stopped three (3) high school students in school uniform who just moments before, had been playfully jostling their way down Cran Street headed towards Douglas Jones Street. The police pickup pulled into the side of the street just ahead of the youth and they were stopped by a Police Corporal and a WPC, questioned and were quickly and briefly searched. The WPC seemed to be writing down their particulars. Then the WPC started taking photographs of the students with a cellphone. Two (2) of the boys did not resist.

A passersby slowed down and stared. The youth standing in the pan of the truck, however, refused to allow it, and put his head down. The Corporal took over the phone and tried. The youth turned his head away, sideways – anyway but straight – and refused to allow his image to be captured. The Corporal took the student by his arm, walked him to the back of the police truck and made him climb in. The image shows him standing in the pan. Where was he being taken? Where was he taken? Why was this even done? What happened next? Only the police (and maybe the Cran Street Three) can tell you that. Residents of Belize City are well aware that every day, for years now, Police routinely stop Black and Hispanic youth on foot, on bicycle and a few in vehicles for search and questioning operations all over the city. Racial and economic profiling of citizens which has been discredited and disapproved by Police Departments worldwide is alive and well in Belize. Those who are stopped are mainly young men, Black or Hispanic, carrying a backpack/bag who look a certain way, dress a certain way and are riding bicycles or walking.

It happens all over Belize City- on the Southside, on the Northside, on the highways, and in the suburbs like Belama, Bella Vista, Gungulung and Faber’s Road Extension. It happens to workers and students alike, and is so routine that some of us don’t even really see it anymore. Or if we do, we think it’s not really a bad thing. Check deh “bad bway”, mek we cud sleep betta. They are spread across the side of police trucks and roughly searched, questioned as to where they are going, where they live, work, and are obliged to hand over identification. Their particulars are written down. They are made to stretch out on the bare sidewalks or up against fences or walls. They are picked up by Police from one area and taken and abandoned by police vehicles in the territory of a rival gang – and in areas like Belama Phase 4.

This is so -called “road policing”. But now it is taking a more sinister turn. Claiming to photograph youth and then to check the photo and detail at Police Stations for outstanding arrest or detention warrants and/or unpaid court fines, the Police are routinely violating the civil rights of the citizenry by entering their personal detail and images into a database, purportedly for ‘future reference’. Welcome to the new form of policing. This is how preventive detention which was rightly and roundly rejected by Belizeans in 2008 now functions operationally and in the shadow of the Law. Sub Umbra Floreo. The law enforcement strategy employed by the Police treats citizens as un-indicted felons. It criminalizes our youth, making them liable to arbitrary search and seizure, with OR without reasonable cause. There is a good reason why a citizen who is detained is fingerprinted and photographed by Police only after being arrested.

Putting the particulars and photographs of these youth (and any other youth who have no arrest record) in a database for ‘future reference’ is absolutely an utter violation of fundamental rights and freedoms of these young men. The brave youth who refused to have his photograph taken by Police on Cran Street was absolutely within his rights to refuse. This was not road policing. It was rogue policing. Fundamental rights and freedoms are not a luxury in a time of insecurity. They are the sole protection that civilians have against the overzealous actions of a powerful law enforcement agency who acts on behalf of the might of the State. Such power of the State over the people is not unlimited. It is fettered and circumscribed by laws and governed by the rule of law – and must be painfully and jealously guarded, lest we become the servants of the State rather than its master. We the people, are after all, the reason that the state exists.

The steadily increasing “mano duro” policing policies of the past 20 years have not yielded a dividend of less crime in our Jewel. We are not a more peaceful place because of such policies. We are a more violent society. Treating us like prospective criminals will not guarantee a more peaceful and just society. Who’s gonna hold the peace when the people no longer trust the Police?