Farmer shot at his farm; in a critical condition at KHMH 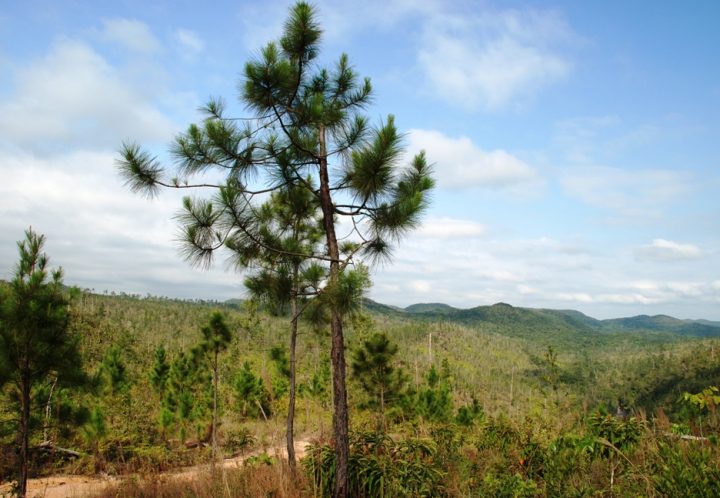 By Richard Harrison: Mountain Pine Ridge Forest Reserve is a nature reserve in the Cayo District of southern central Belize. It was established in 1944 to protect and manage the native Belizean pine forests. Its boundaries are poorly defined, but it is estimated to cover an area of 106,352.5 acres, although much of the reserve has been leased.

The reserve is predominantly pine forest (58.5%), primarily Honduras pine, Pinus caribaea var. hondurensis, but with a significant broadleaf forest component (36.8%). There are small areas of grassland (3.4%) and wetland (0.6%). Roads, rivers and other features make up the remainder of the area (10.9%). The climate is subtropical with a rainy season from July to February. During the dry season (February to May) temperatures may reach 39 °C (102 °F) with a humidity level of 70%.

The majority of the reserve is situated on a granite massif, with some areas of limestone in the west of the reserve (remnants of a limestone plateau laid during the Jurassic). Sinkholes and caves are common in the limestone areas. The underlying soils are predominantly sandy. The elevation of the reserve averages between 400 and 700 m (1,312 to 2,296 ft) with the highest point being Baldy Beacon at 1,017 m (3,336 ft), and dropping to 120 m (394 ft) at the lowest point on the Macal River.

The Macal River forms the boundaries of the reserve to the west and south and is fed by tributaries including Rio Frio, Rio On, Privassion Creek and Pinol Creek. To the north-east some small streams feed into Barton Creek.

Little is known of the early history of the area. The Maya had a city at Caracol on the borders of the modern reserve as early as 1200 BC, and Mayan artifacts discovered in Barton Creek Cave suggest that it was used as a ritual site. There is no mention of Mountain Pine Ridge in Hummell’s 1921 report of Belizean forests, but it is believed he may have been the first forester to visit the area in 1897. To control increasing forestry activity in the area, a region of 1,504,000 acres (6,086 km2) was designated as forest reserve in October 1944, but despite fire control measures being established in 1945, much of the forest was destroyed by a fire in 1949.

Few trees in the existing forest date to before this period. The reserve was reclassified in 1952 as a production forest and the 1950s saw the provision of roads and a landing strip. In 1959, the area of the reserve was reduced, losing some land to the neighbouring Sibun Forest Reserve. Hunting was banned in the reserve in 1978 in recognition of the nature conservation role that could be played by the reserve.

San Ignacio and Santa Elena is a twin-town situated on the banks of the Macal River, about 63 miles west of Belize City, 22 miles west of the country’s capital, Belmopan; and 10 miles east of the border with Guatemala. The population of the town and its suburbs is estimated at around 30,000, made up of a diverse mixture of people, most of whom can speak both Spanish an English.

The economy of the town was driven historically by the mahogany and chicle industries until the 1980’s, when the agricultural development of the surrounding areas replaced those declining industries. Agriculture was later enhanced by secondary processing of juices, meats, wooden furniture, arts and crafts…and tourism and financial, hydro-electric energy generation, education, health and entertainment services…more lately by offshore call-center services.

The road access to the Mountain Pine Ridge from San Ignacio is currently under-developed, making traffic difficult when it rains…and requiring as much as three hour’s drive to reach the furthest points such as Caracol Maya temples. The design phase for the asphalt paving of the 55 miles of roadway to Caracol is almost complete, and pavement is expected to be completed over the next 5-8 years, financed by a concessionary OPEC loan. This pavement will open up all kinds of opportunities for private and public investments. Caracol will become less than an hour away from San Ignacio….so will the Thousand Foot Falls…Rio On Pools…Rio Frio Caves…Big Rock…and other important sites yet undeveloped.

San Ignacio does not have a medium-long term development plan….but it should be developed based on a tripod strategy of TOURISM (sustainable eco-cultural tourism); INDUSTRY (agri-business/forestry/mining/light manufacturing); and SERVICES (education/health/construction/financial/trading services).

If such a strategy is to be practical….then the managers of San Ignacio needs to see themselves as stewards not only of the resources within the boundaries of the town limits….but they must actively pursue and facilitate the development of the resources in the surrounding area….especially the Mountain Pine Ridge…which has significant potential for tourism, mining, water, upscale residential and agro-forestry development….but also El Pilar, The Macal and Mopan rivers, Xunantunich, Cahal Pech, ATM and Barton Creek caves, etc….the town managers should participate in providing leadership for the institutionalized development of these public resources….because they are important to the development of the township. The town also needs a quarry to supply aggregates for infrastructure development at optimal cost. NICH should pass on the management of the resources under their control to the local communities….and go on to develop more of the abundant resources of Belize….not become perpetual harvesters getting fat and lethargic….they should be at the forefront of developing new sites of economic value….so that the inland tourism and cultural experiences are rich, meaningful….and highly valued….by locals and visitors alike.

A blue print needs to be developed for the Mountain Pine Ridge….similar to what the Mexicans call Centros Integralmente Planeados (CIP) or Integrally Planned Centers….such as the Riviera Maya…so that investors know from beforehand what the development plan is….and will not face restrictions and even retribution after they already have investments on the ground. A private-public partnership consortium can be very effective and efficient in moving such development forward….and the managers of San Ignacio can play a central role in bringing it all together….because, in the end, the people of San Ignacio and Santa Elena will be significant beneficiaries. Town managers should represent the best interest of the people…not only a geographic town limit.

When leaders have vision….the people prosper!