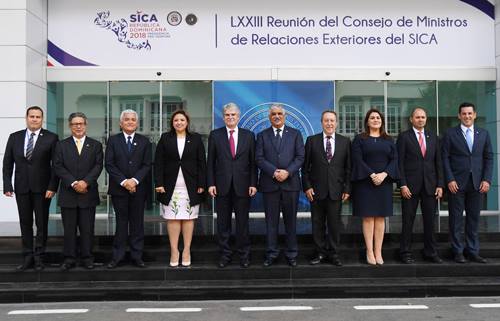 By BBN Staff; Chief Executive Officer in the Ministry of Foreign Affairs, Patrick Andrews, led a delegation to a Meeting of the Council of Ministers of Foreign Affairs of the Central American Integration System (SICA) in Santo Domingo, Dominican Republic.

There, they met with the Spanish Minister of Foreign Affairs and Cooperation, Alfonso Dastis.

The SICA Foreign Ministers thanked the Kingdom of Spain for their continued support in the regional integration movement, particularly in the areas of institutional strengthening, human rights, poverty alleviation, and security.

According to a release from GOB’s Press Office, the SICA ministers welcomed the signing of the fourth phase of the SICA-Spain Fund that will support the region’s commitments to the 2030 Agenda.

During a separate meeting, the Council of Ministers of Foreign Affairs of SICA took the opportunity to discuss the work of the Secretariat and dialogue on the way forward, particularly on the various regional mechanisms in the areas of immigration and security.

Andrews also met with Dastis to discuss the continued bi-lateral relationship between Belize and Spain, particularly in the areas of scholarship opportunities for Belizeans.

Andrews was accompanied by Eduardo Lama, Belize Ambassador to the Dominican Republic and Margaret Juan, Charge d’ Affaires  at the Embassy of Belize in El Salvador.