On Avocados, Cops and Stupidity 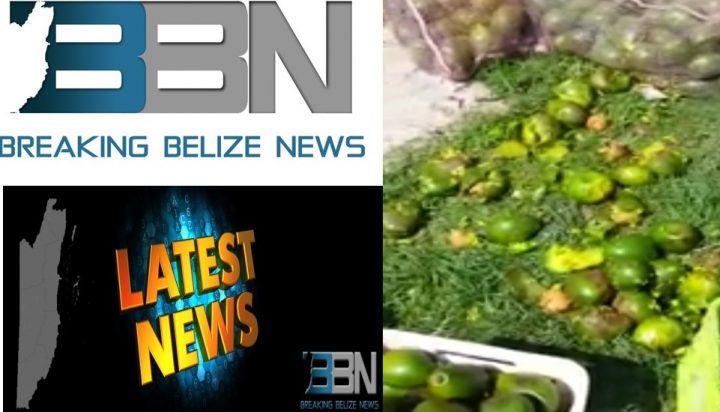 By Lisa Shoman: My grandmother’s people are from San Estevan and she is a proud “Aguacatera”. She knows her avocados and thanks to her DNA, I inherited a love for those luscious pears. Every Belizean acknowledges, no matter how reluctantly, that the very best avocados in Belize are from San Estevan and its surrounds. The biggest ones grow in Corozal. It is known – dah soh.

Jewelizeans absolutely love their pear, and the larger bright green smooth skinned shiny varieties that grow here are far superior to any Mexican Hass variety. Butta pyah or mantequilla is the emperor of avocados. But, our avocado season is short because our Maya gods have a cruel sense of humor.

So yesterday, when camouflaged Police at the market in Belize City, brutalized and violated the rights of a market vendor and his precious sacks of early avocados, they trampled on all of us. The searing images of smashed bruised pears, enticing emerald flesh exposed to the brutal sun before their time, will live with us forever.

The shocking news moved at the speed of virus through social media in Belize thanks to eyewitness videos and knocked everything else off the social media news-day radar.

Nobody noticed that the infamous Martinez, murderer and violator of our Baby Alyssa (allegedly) was charged in Magistrate Court for those crimes. Nobody much cared about the 20,000 Strong rally, including my own wonderful speech. Nobody much speculated about the fourth (or is it the fifth?) plane to land in the north in the past 16 days, or the person seized on the scene, except later, to link it to the avocados. FECTAB demands? Weed in the Chiquibul? Routine. The ICJ? Nobody is listening to George nehhow. Ney neem kay. Another murder in the city, kinnel-side? Late but still…Maybe we have become jaded.

So what the hell was it about? I’ll tell you. Or better yet, let the eyewitnesses on Channel 7 news tell you.

Voice of: Eyewitness “It was around 6pm in the evening. I was closing my business and I went outside and I saw 2 police officers holding a guy for some avocados. Asked them why they are holding him for. He says [police] because of contraband avocados. So we stood there and I say but those look like local avocado. The police didn’t want to listen to anyone. They call someone and they stayed there like an hour. I expected they were waiting for some bargain or something. Then the mobile reach and ask what was going on and that’s when they were told that they have some contraband avocados and they put it in the truck. The guy who had the avocado was willing to go in the truck with them because it was his avocado, but then they put 2 other stuff that did not belong to him, so that’s when he refuses to get inside of the truck.” Courtney Weatherburne “What two other things that the police there?”

Voice of: Eyewitness “I didn’t know what that was. So then that’s when he refused and the police put him in the car and that’s when they rough him up and try put him in the truck brutally. That’s when we try to step up and took a video and say you don’t have to treat people like that and then the thing is that one of them came with a shotgun and he look like he was ready to pull out that shotgun and shoot anybody who tries to interfere with them. The police officers need to know how to do their job correctly. Respect to gain respect and it was food. It was not drugs, it was nothing bad the guy was doing.”

Beloved. It was the Avocado Suppression Unit at work. I know, I know – local wits have dubbed the Police on the scene of the melee, the “Guacamole Suppression Unit” – probably to mock the hated GSU. Not me. I say it’s a totally new and brutal force. The ASU. Pronounced “assyu”.

All fun and joke aside, the amateur videos complete with colorful, expletive rich commentary all show the ASU in camouflage (the WPC present in her regular uniform seemed to just be an onlooker) manhandling, wrestling and brutalizing the hapless helpless avocado dude.

Nobody on the scene dared physically interfere, but “interfaaas” they certainly did, risking arrest to bless the police for their chancy wicked brutal handling of man and produce. Many advised the youth not to get into the police mobile unit truck, with very, very good reason. People have been known to “jump out” and thereafter die.

Loath to risk the possibility, no doubt, they stuffed him into the vehicle itself, wedged between stalwart defenders of the civil peace and good order of the city, and left the baying market mob behind.

Then they took him to the Raccoon Street Station. Kicked and shoved the avocado dude into the station (allegedly) and administered a vicious beating to 600 of the 1000 innocent avocados and left many smashed and bleeding green flesh on the ground and other bruised in crates.

Why? Allegedly they were contraband avocados. UnBelizean. Unholy perverse fruit born in another nation not the Jewel.

And then, just as suddenly as “guana rain”, they released the avocado dude and his precious sidekicks. No charge. No explanation. No avocado left untouched. Why?

All right-thinking Jewelizeans are justifiably outraged. Brutalize our bodies? We vex. Mess with our food? It boils over into rage. Rage at the wanton waste. Rage at the chancy-ness of the cops. Rage at the drubbing of the dude at the market trying to earn his honest living.

The vox pop in Belize is sophisticated in their ire. One opined “The Police can arrest an avocado vendor but know nothing about a drug plane that almost lands on their head.”

My beautiful brother in the corn put it best “How have we ended up here? That in the same newscast where a hard working young man was beaten and dragged to the station by the police, never charged and sent away, all for selling avocados, in this very same newscast, the very next story is that the Person caught close to the drug plane was NOT CHARGED, and sent home, but not before calling Connections! What the hell is wrong with us! Don’t we see what is happening here???”

Stupidity. Utter stupidity on display for the BPD, and I don’t mean the Belizean Produce Debacle.

There is a new Sheriff in the old capital according to Jules. I like the way he walks, talks and sounds. People gonna be watching to see how he handles this. It will be his first test. We are out of patience and bex bad, really bad. I truly hope the Sheriff is up to this and I truly wish him the best.

Our newest (and favorite) DCP (Deputy Commissioner of Police) assures us that “In the matter of the police officers and the avocados, the officers concerned are being investigated with a view to ascertain what action will be taken against them. I want to assure the public that as a department we are disturbed by the images depicted in the video, such behavior is surely not what we expect from our officers, especially in this era where we are seeking your support in making our communities safer. I trust that you will continue to work with us in identifying those officers who are determine to abuse their power and take advantage of our citizens, while also giving us your support in making our communities safer.”

Rest assured we will, DCP Williams and we will hold you to it. We now know cops can’t just road police us. But we can road police them.

Belize isn’t safer when cops stupidly smash avocados. It is just angrier. We have bigger problems to fix than errant market produce.