On political posters, banners and lawfulness…Between these lines 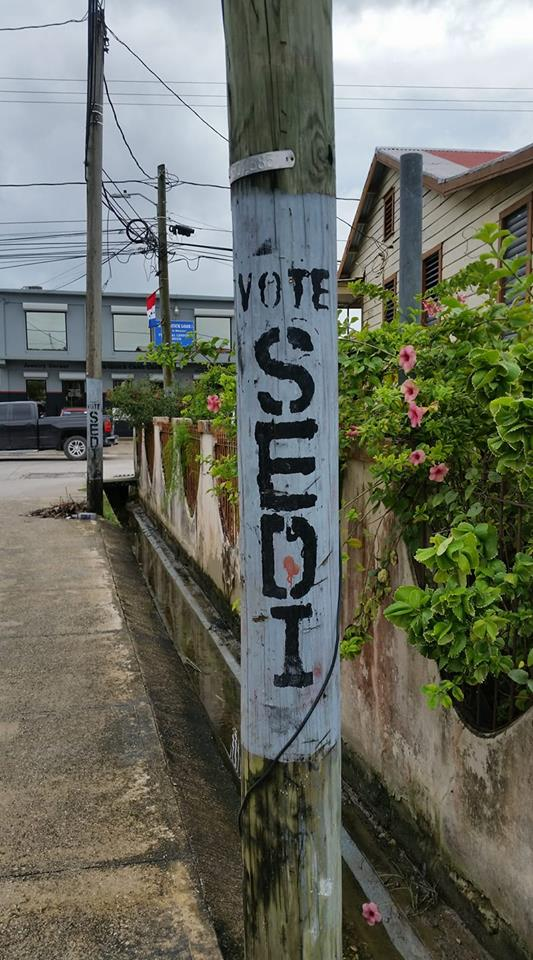 By Glenn Tillett: (I wrote this essay earlier today and was contemplating releasing it. I do not wish in any way to promote the continuation of the political polarization that continues to plague our society. While walking back from the PM press conference today a shouted threat from a passing partisan reminded me that I may not be here that long …)

I think it was Ann Marie Williams, then the editor of the now-defunct Pulse, which was the successor to the Beacon, and the predecessor to the Guardian as the UDP’s party organ, who back in the 1990’s recommended that Belize adopt the Barbados approach to elections. In Barbados she told me, election day is quiet because all posters, banners, buntings and other electioneering paraphernalia must be taken down, and all advertising must cease 24 hours before the poll. As a result election day looks like an ordinary day.

I am reminded of this often when I see lampposts still painted with “Sedi” more than a decade later. I suppose I will never forget a young man showing me what appeared to be a gun stuck in his waistband as he appeared to guard another young man painting “Sedi” on a post on North Front Street in 2007, and I had stopped to stare.  At the time BEL had made the effort to paint over the red paint with gray paint but Sedi and his minions had gone back and re-painted over what had been painted over. I further note that Mr. Elrington is the area representative for Pickstock, formerly the Attorney General, but is currently the Foreign Minister and the Minister with responsibility for the Police.

The effort expended by the parties in terms of matériel, money and sheer human energy on their propagandizing is tremendous. Belize has no legislation regulating campaign financing and expenditures, so it is near impossible to estimate with any credulity how much is spent by whom on what, where and when but my simple eye test is that it is a goodly amount.

The reports of shootings and deaths in Belize City over the past several hours reminded me again that guns and gangs are not only commonplace but it could be argued that a political culture that spends tremendous but unaccounted sums promoting partisan social and political polarization, and comparatively little on positive efforts to at least mediate and agitate for a more lawful and peaceful society, must be one of the causative factors.

I complain that the rhetoric that I have heard emanating from the House of Representatives the past two (2) decades generally, and in particular from the current Prime Minister and former Leader of the Opposition, which accused and condemned his political opponents of “crimes” helped to create the atmosphere of lawlessness that now prevails.

I single out the Prime Minister because he is the “paramount chief” of our Belizean tribe. His supporters and my detractors will argue that members of the opposition are also complicit. To some degree, we are all guilty. The maximum leader was elected and chosen to lead though, and his constitutional duties and responsibilities cannot be gainsaid.

Lawfulness must prevail. Enforcement of all laws, without fear or favour must be the order of the day if we are to return to what now seems that mythical peaceful nation in the heart of Central America by the Caribbean Sea.

I unequivocally and categorically call for the establishment and the operational implementation of an international commission to investigate and prosecute corruption in Belize, like the CICIG in Guatemala. I also declare that I will not support any politician who fails to publicly declare their support for this initiative.