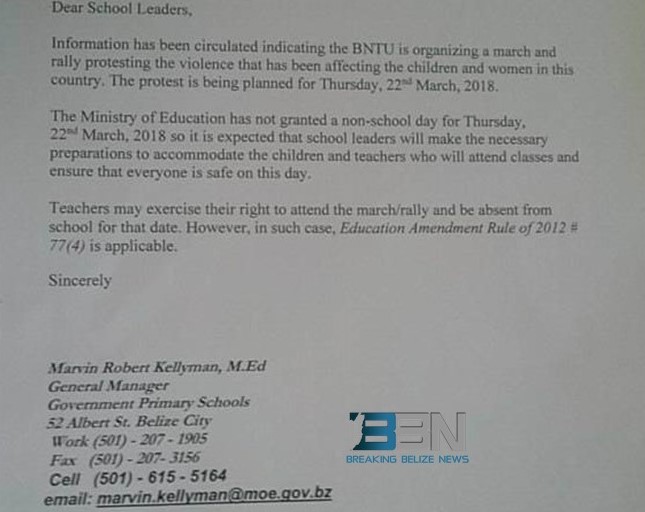 By BBN Staff: A leaked memo issued by the General Manager of the Government Primary Schools, Marvin Kellyman informs all school leaders that for the protest planned by the Belize National Teachers Union (BNTU) for Thursday, March 22, 2018, the Ministry of Education has NOT granted it as a non-school day.

“ It is expected that school leaders will make the necessary preparations to accommodate the children and teachers who will attend classes and ensure that everyone is safe on this day,” the memo says.

The memo also explains that teachers may exercise their right to rally and be absent from school for that date, “however, in such case, Education Amendment rule of 2012 #77 (4) is applicable.”

(The  Education Amendment rule of 2012 #77 mandates the Ministry’s and Managing Authorities’  to ensure the continuity of classes.)

The memo was sent to all school leaders of Government Primary Schools countrywide.

The BNTU announced last week, their plan to have a national rally against crime on women and children this Thursday and also publicized a letter they sent to the Ministry of Education requesting that a non school day be granted for the protest.