Budget rounds out with debate on number of issues 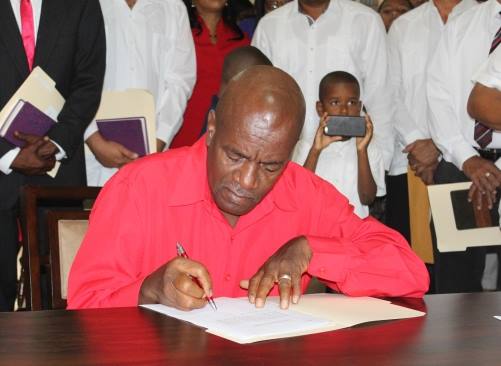 By Lisa Shoman: Not because it is Women’s Month – but it still IS Women’s Month – I am giving my mouth (and fingers) “full license” to talk about and write about issues affecting women.

Yesterday, Michael Finnegan, Member of the House of Representatives for the Mesopotamia Division, (to give him almost his full title) during the budget debate, on the floor of the House, rose to his feet while another Member was speaking on a “point of order” and the following exchange ensued :

Hon. Anthony Martinez, Port Loyola Area Rep.
“Madam Speaker, on a point of order. I am stating here this is the facts.”

Speaker of the House
“Honorable members let it be very careful. We don’t want to add to the prevailing attitude and the whole feeling in the community. Go ahead member. Please, but…”

Finnegan then rose to the microphone despite the fact that Anthony Martinez was still on his feet, and the Speaker was still speaking, cut her off, and said :

Hon. Michael Finnegan, Mesopotamia Area Rep.
“When the member from Cayo South was talking and being disrespectful and rude – how you sat down right there and you laugh. I sat down back there and didn’t tell you anything – when you throw lick and a man lick you back – you must know how to take lick.”

While speaking he was addressing the Speaker. By established parliamentary procedure, all Members address the speaker directly and not each other.

Yes, words are thrown across the well of the House often enough in both nasty asides, and flagrant breaches of the practice. But only moments before, the Speaker had reminded members that they address her and not each other.

Don’t get it wrong, Finnegan is a veteran of over 30 years (as he loves to remind us) and in this last run, he is in his 34th year in Parliament. He is more senior than anyone save Said Musa and Dean Barrow.

Finnegan is also a notoriously flagrant misogynist. He has disrespected women and Speakers going back to the Honorable Elizabeth Zabaneh with whom he tangled frequently and notoriously. One example in which he and his Leader participated suffices :

There is no record of disrespect by Finnegan to Speakers Carlos Castillo, Robert Swift, BQ Pitts, Emil Arguelles or Michael Peyrefitte but the Hansard would disclose any such disrespect and the media would have gleefully featured the exchange.

And it isn’t just Speakers who are women who are disrespected by Finnegan. There was the particularly nasty vitriolic attack on the Honorable Dolores Balderamos Garcia in August 2013. I remind you of his exact words :

Hon. Michael Finnegan – Area Representative, Mesopotamia
“To get up and say that the she saw the chairman of arms urinating out there – then I nearly want to ask her, like what – you understand me Mr. Speaker. If she saw the sergeant of arms urinating, what size was it? She’s asking for it Mr. Speaker. You will get up as a big senior member of this House, an attorney at law and you will look at a small man, a small minded man (not a small minded man) but a small body man like the sergeant of arms. When you were in government and Brutus was the sergeant of arms, Brutus came across to me where I was sitting down and he came and took away the mike from me. I don’t have any problem with Brutus, he’s a PUP – you set him to sit down where ‘Yellow’ is, he’s doing his job so what’s wrong with that. He didn’t go pass the limit, you remember the occasion Prime Minister so I surely don’t know – because the things I know about you mam and the things I know about your husband that they have told me, you have got to be very careful.”

Insult and threat. It was so egregious that the Special Envoy spoke out against the invective.

When called out by women and the media, Finnegan was unrepentant, saying:

Finnegan never apologized to his House colleague. Clearly, in his head, men don’t apologize to mere women. Politics for him is a “big man game”. If you want to play, “tek yu lik”.

His apology went like this : “…first of all, I would like to apologize and say sorry to the public and the citizenry of Belize. Things went so fast that day in the National Assembly that the Speaker was in no position to control what was happening; it went too fast zip zap zap zap and if I disrespected the House that the Speaker chairs, I want to secondly apologize to the Speaker of the House and my colleagues on the other side of the house and my colleagues on my side of the House, I think that I would want to apologize to them also and bring whatever is happening to an end.”

To get back to the current contretemps; Speaker Longsworth didn’t even respond to Finnegan.

Perhaps the Speaker was in shock. This Speaker is not a confrontative or combative person by nature, unlike say Speaker Zabaneh. And this Speaker had no cause to expect any problem from the side who nominated her. But disrespect her, Finnegan did.

If it had been me, ( yes, I will grant myself the privilege of Speaker on my wall) I would have gotten on my feet. At which point, when the Speaker rises, all those speaking must sit. I would have demanded an apology forthwith and I would have named Finnegan and suspended for at least the rest of the current meeting.

Misogyny is the dislike of, contempt for, or ingrained prejudice against women. The time for misogyny is over. Like homophobia misogyny is hate speech and unacceptable.

Finnegan’s plain words and attitude qualify. But it is not him alone. The era of Big Man Politics in Belize must end. The testosterone spill across the House floor is a reflection of that which is killing the youth, men, women and children of our Jewel, literally.

It cannot be allowed to continue or go unremarked. The notion that if women want to be equal with men, then they must learn to “tek lik” is a Neanderthal construct. Time to put the fallacy to rest because it is killing us.

I wrote the first draft of the Manifesto for Linda because although we claim that women and girls are also nation builders, we do not yet permit than an equal say, or an equal opportunity. Attitude shapes culture shapes action.

Finnegan’s attitude and his words reflects the true state of our current culture and is poisonous.

The idea that men – and women – must endure invective and give like for like is what has us blind and toothless right now.

You wah we tek lik? Lik out pah disrespect. Lik out when yu see bad. Lik out soh respect.