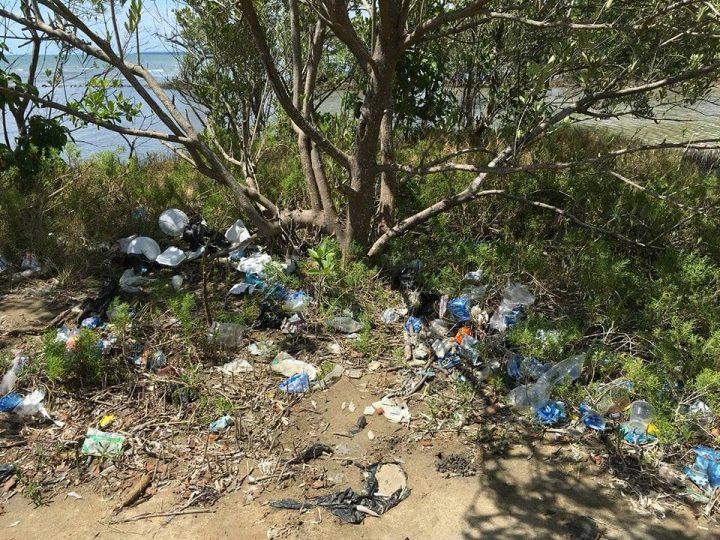 By BBN Staff: Over the long Easter weekend, many Belizeans traveled all over the country to spend time with family or to go swimming and cool down from the blistering heat.

Many inland tourist destinations as and environmentalists made an effort to raise awareness against littering on beaches by placing signs  to remind the public to properly dispose of trash.

Unfortunately, however, as is usually the case after the Easter weekend, many beaches, river banks and road sides were left full of garbage.

Hoteliers, environmentalists, volunteers and council workers are left to clean up the trash, which can have potentially harmful effects on the environment.

OCEANA’s field representative for the Belize district, Celisha Guy told BBN: “We did a clean up campaign the weekend before Easter, we cleaned up at Belizean beach and clearly the area is being used.  The amount of garbage that is left in that area blew my mind away…People use the beach but they leave behind their trash.”

Guy told us that after cleaning up, they removed tons of plastics, Styrofoam and even diapers from the beach. “People come out here to recreate and they just leave their trash behind…the trash was thrown into the mangroves, we have to get out of that behavioral trend thinking that someone else will come behind to clean it up, it is not other people’s responsibility, it is our responsibility to pick up after ourselves. We need to get people to have that culture of civic pride and cleaning up after themselves.”

Furthermore, Guy says that garbage thrown along beaches and river banks will eventually end up in the rivers and oceans, so a part of advocating for the protection of the sea is to ensure that people put garbage in the proper place.

“Garbage going into the sea definitely impacts the marine life, and also comes back to us because the animals in the sea ingest those toxins and when we eat the fish, it causes health problems, so it’s about taking care of the environment, the animals and of ourselves,” Guy explained.

Government recently announced its proposal to reduce plastic and Styrofoam pollution through the phasing out of single-use plastic shopping bags, Styrofoam and plastic food utensils by April 22, 2019.

Guy says that that initiative should be commended since it will have positive impacts on the environment and our health.

Guy recommends using biodegradable products and reusable items which are available in Belize.