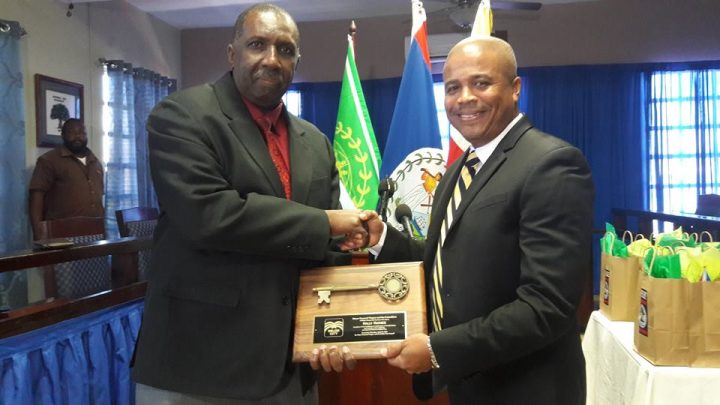 By BBN Staff: As a symbol of friendship, Belize City Mayor Bernard Wagner presented  Hally Haynes, president of the   Caribbean Confederation of Credit Unions, the key to Belize City during a ceremony at City Hall this week.

Wagner explained that the Belize City Council hosted the CCCU as a gesture to strengthen ties with both the regional organization and the credit uions in Belize.

“…  we felt as a council that campaigned on ensuring that we looked out for the business of the people that felt that what better way to show that we are all about the people by hosting the president of the confederation of credit unions here at city hall,” Wagner said.

The Caribbean Confederation of Credit Unions (CCCU) was established on in 1972. The practice of giving keys to the city is rooted in medievil times when cities were usually surrounded by walls and access was limited. In the traditional sense, a person given a key to the city was given an actual key, symbolizing that they were trusted enough to go whereever they wanted inside the city, because they had done something great.

In the current use of the practice, the key to the city is given to distinguished visitors, as a means of honoring them. In 2001, Mayor David Fonseca presented a key to the city to Marion Jones after she displayed a Belizean flag following an olympic victory.

In 2009 Mayor Zenida Moya-Flowers presented one to the president of the Central American Black Organization (CABO). Mayor Darrell Bradley had also presented a key to the city to motivational speaker Anthony Gill in 2014.