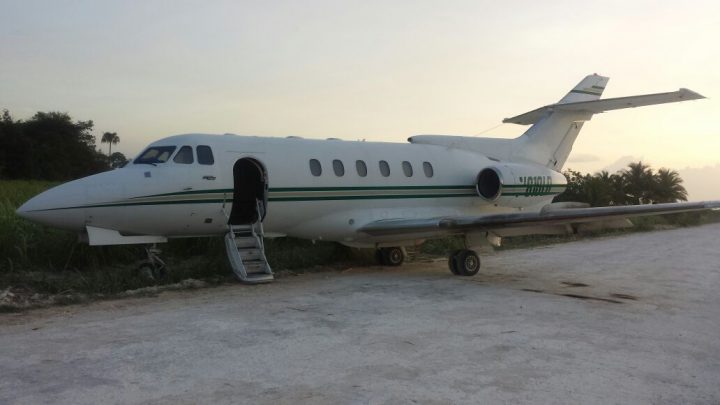 By BBN Staff:Police have remained mum on the jet plane that landed around 5:00 a.m. yesterday on the San Estevan Road in the Orange Walk district.

Since the beginning of 2018, there have been six reported landings of suspected drug planes in Belize.

Residents in the area reported that around 3:00 a.m. yesterday, they heard the sound of a plane flying low.

Near the plane, residents observed that the bush was cleared to make way for landing.

Around the wing of the jet appeared scorched as if an attempt had been made to burn the aircraft.

As with other planes found in Belize, it was reportedly empty. All its contents, pilot and/or passengers were gone by the time police arrived.

After the discovery, the plane was under heavy police guard and representatives from the United States Embassy in Belize also did an inspection on the jet.

A former officer from the Belize Defense Force told BBN that the jet is a HS125 Jet and the maximum take off weight is 25,000 pounds. The jet when stripped bare weighs around 12,500 pounds.

The officer also estimated the cost of the jet to be around $2.5 Million.

The media has requested an official police report on the jet, however, none has been forthcoming.