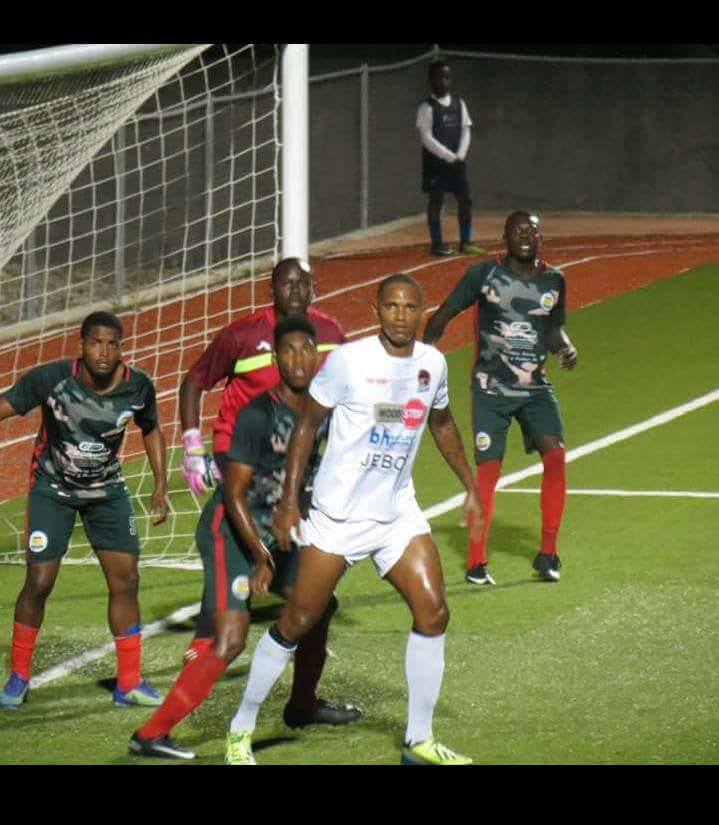 By BBN Staff: The finals of Premier League Of Belize (PLB) closing season kicked off on Saturday May 19th inside MMC Grounds where the game was hosted by BDF FC.  Both teams needed to start the finals off with a bang so the second game would not have to be so rough.

In the first half of the ball game Tyrone Pandy scored a header and gave Bandits the lead and in the second half two more goals were scored by Bandits’ Jerome James and Roney Sanchez respectively.

Trimayne Harris of BDF got the lone goal for this team.

So Bandits moved into the second game calm while BDF knew they had given their all in the second and final game.

In the final match up on Sunday, Belmopan Bandits hosted BDF FC at the Isidoro Beaton Stadium.

A crowd was at the game rooting for their favourite team.

Again Bandits got on the score board by a goal from Ronnie Sanchez assisted by Honduran Georgie Welcome early in the first half.

BDF  got a penalty in the 25th minute and Trimayne Harris scored and tied the ball game.  At this time all excitement raised as Welcome scored a header from a corner kick putting his team back in the lead.

Minutes later the aggressive Georgie welcome then scored a hat trick which had his team mates stunned and also excite the fans who said that’s the best goal they saw all season.

Early in the second half a penalty was given to the Belmopan Bandits from a foul from BDF’s Captain Ricky Rickets.

The Penalty was taken and scored by George.  With this lead the Bandits team already celebrating until Tarell Flores put one in for the BDF FC and a penalty given again for BDF and scored by Trimayne Harris.  This made the Bandits slow down a bit an got serious.  Both teams played very aggressively and hungry for the championship and it all came down to the 88th minute.

Bandits was given a free kick just above the 18 yards box and their other Honduras Import Darwin Bermudez with his skilled left foot curved one around the wall of the BDF FC and found the back of the net.

Couple minutes later the whistle blew and Belmopan Bandits was crowned PLB’s closing seasons Champions and will be participating in the Scotia Bank Concacaf League.

Awards were given to different players from the different teams for the PLB 2017-2018 closing season.

BBN would like to congratulate all the awardees and the Belmopan Bandits on the Championship.

Good luck in the Concacaf League