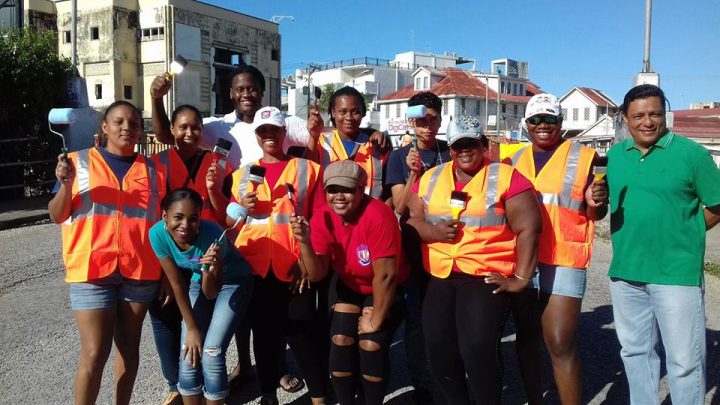 By BBN Staff:  On Saturday, the Belize City Council in collaboration with students from the Wesley Junior College (WJC), painted the historic “Swing Bridge” in Belize City.

The initiative began at 7:30 a.m. today and saw the turnout of over ten students who painted side by side with Councilors, Vaughan, Goodin and Deputy Mayor, Oscar Arnold.

Councilor Goodin told BBN, “We are here. We are working hard. We are trying to upkeep a bridge that has substantial historical value to our city.”

“The students have decided to volunteer and to engage in community service because they want to give back to this city,” he added.

Goodin told us that it is an overwhelming feeling to see “young people, the future leaders of Belize City, giving back without reward or recognition.”

“They are among some of the most sincere groups of young people I have ever met. Wesley Junior College, deserves commendation for the fashion in which they are grooming their students,” said Goodin.

It has come to BBN’s attention that another bridge in Belize City, BelCan Bridge, may also need some attention.

Goodin confirmed that the motor had been stolen but indicated that he would not be able to further comment until he has received more information on the matter.

However, he condemned the action and said that it would, “hamper the development of our city.”

The Belize City Council is preparing to introduce a summer sports program for children in Belize City as its next initiative.