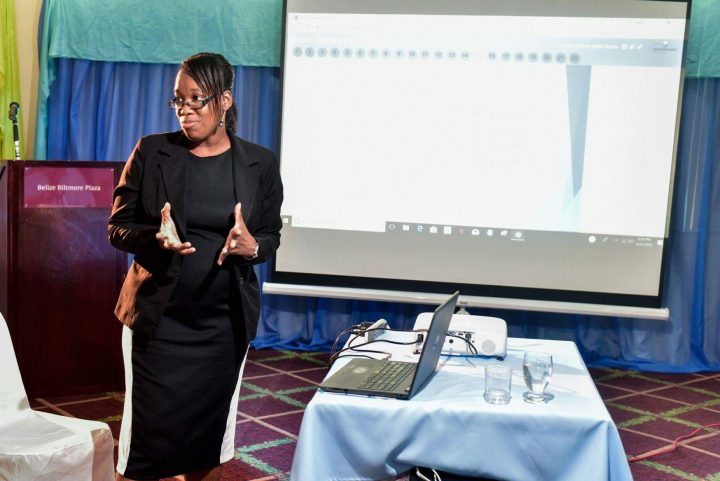 By BBN Staff:  Prominent Belizean journalist, Adele Ramos, is being celebrated as the winner of the Physical Map Display at the 7th Belize Esri User
Conference held in Belize City.

The conference was held late last month for users of Geographic
Information System (GIS) in Belize.

Ramos’ presentation focused on the evolution of Belize’s transportation network.

She told BBN that, “The network evolved from a rudimentary network
consisting mainly of cart roads and in places like Stann Creek,
railways.”

“The Hummingbird Highway was built upon the remains of the Stann Creek
railway, so there was a fascinating evolution,” she added.

In her presentation, Ramos also highlighted navigation via rivers.

She explained, “We also had the boating traffic that used the Belize
River regularly before the highways were established. Primarily, the
network served the logging industry operated by the British as well as
the agriculture industry (bananas being chief in the South when the
railway was operated).”

According to the esteemed journalist, the map she entered into the
contest showed where the settlements of Belize are located, relative
to the current road network.

“Although more than 90% have access to roads, most roads are still
deemed substandard, relative to the CARICOM average. This is shown in
the presentation. The percentage of well-surfaced road is still low.
The Manatee Road or the Coastal Road is still un-surfaced after
decades,” she informed.

She told BBN that there is a plan by the Government of Belize to,
“upgrade and to add a new link between Cayo and Orange Walk but more needs to be done to bring the remainder of Belize’s roads up to a
higher standard.”

According to Ramos, she first began learning about GIS in 2014 but

this is her first time participating in any such competition.

This year’s conference was organized by Total Business Solutions
Limited in Belize. Every two years a conference is held so that
persons who use GIS platform can showcase their works.