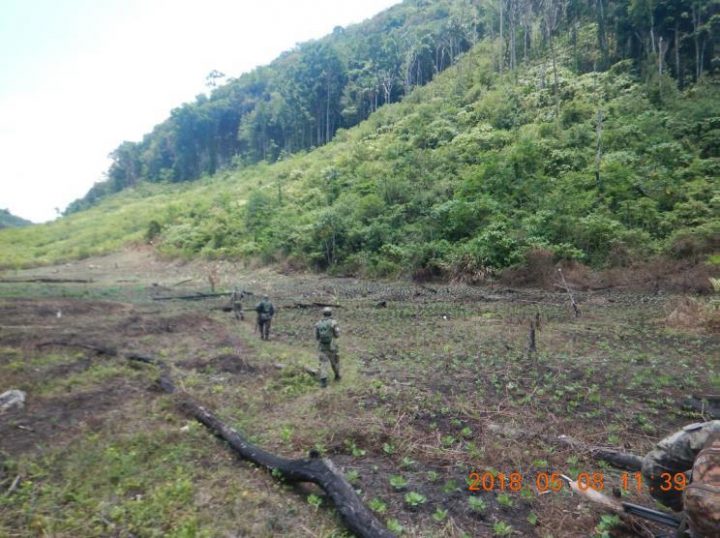 By BBN Staff:  Today, Belize’s Ministry of Foreign Affairs issued a release commending Friends for Conservation and Development (FCD) for the detention of illegal Guatemalan farmers inside the Chiquibul National Park.

The high-level group confirms the following:

Last Wednesday, June 6th, at around 10: 30 a.m., a group of park rangers from the co-managing organization FCD intercepted five persons in possession of endangered game birds in the Chiquibul National Park, 4km within Belizean territory.

The rangers attempted to detain the five persons but three managed to escape.

One of the escapees aimed a .22 caliber rifle at the Chief Ranger, a trained special constable, who in self defense fired a warning shot before the escapee ran off into the jungle leaving the firearm behind.

The detainees were handed over to the San Ignacio police station where illegal entry and poaching of wildlife charges were laid by the Belize Forest Department.

The firearm was processed by the Police Department and held as evidence.

In carrying out its investigation, the high-level group reviewed FCD’s actions and found them to be consistent with the Rules of Engagement for addressing life-threatening acts of potential hostility by persons found in the National Park.

Due to the complexity and high frequency of illegal cross-border activities in the Chiquibul National Park, which straddles Belize’s western border with Guatemala, the FCD provides its rangers with relevant, comprehensive and rigorous training through the competent authorities, including special constable training with emphasis on human rights administered by the Belize Police Department.

FCD rangers patrol the Chiquibul National Park regularly under the command of BDF patrols, and particularly so in the Adjacency Zone.

When patrolling alone, FCD ranger teams are required to strictly adhere to the Rules of Engagement developed in collaboration with Belize’s law enforcement authorities.

The FCD has had a co-management agreement with the government of Belize since 2007.