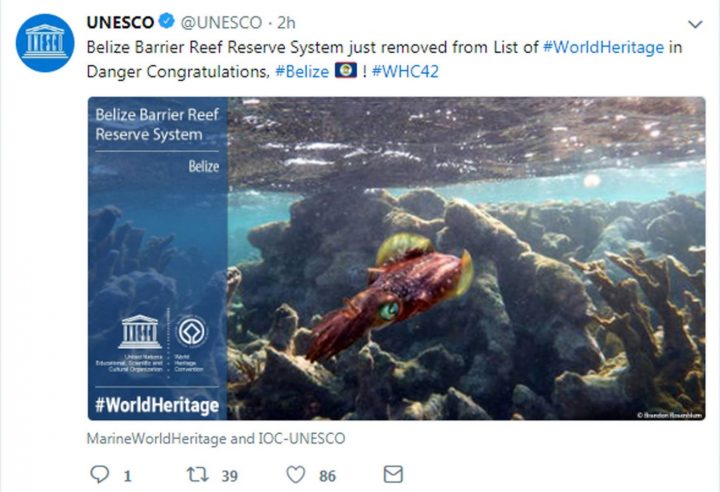 By BBN Staff: Belizeans and environmentalists worldwide are celebrating the removal of the Belize Barrier Reef, one of the world’s most diverse ecosystems, from UNESCO’s List of World Heritage in Danger.

The de-listing was officially announced at a World Heritage Committee meeting in Bahrain today.

The Belize Barrier Reef Reserve System World Heritage site had been inscribed on the ‘In-Danger‘ list for almost a decade due to the threat of irreversible damage from harmful coastal construction and oil exploration, as well as the absence of a solid regulatory framework.

Seismic testing for oil was permitted just 10 kilometres from the site as recently as October 2016, leading to a public outcry from Belizeans organized by a coalition of local civil society, including World Wildlife Fund (WWF), Oceana, Belize Tourism Industry Association, Belize Audubon Society and Belize Institute for Environmental Law and Policy.

Local efforts were supported by an international campaign led by the World Wildlife Fund (WWF).

A landmark moratorium on oil exploration in Belizean waters was adopted in December 2017, making Belize one of only three countries in the world with such legislation.

In June 2018, the government of Belize enacted critical regulations to protect the country’s mangroves and committed to legislate the current voluntary moratorium on selling the public lands within the World Heritage site.