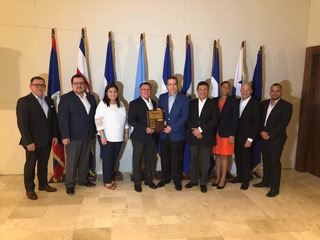 At the CCT meeting, Francisco Javier Garcia, Minister of Tourism of the Dominican Republic, and current President Pro-Tempore of the CCT provided a summary of achievements during his presidency from January to June 2018.

Those included the successful integration of the Dominican Republic as an official member of the CATA, and its work in promoting multi-destination travel within the Central American Region.

At the end of this CCT Ordinary Meeting, Garcia led a ceremonial transfer of the Pro-Tempore Presidency for the CCT to Heredia.

As per protocol, under the Central American Integration System (S.I.C.A., for its Spanish equivalent) Belize takes over the Pro-Tempore Presidency of this regional organization and of its various arms, including the CCT, on July 1, 2018.

Heredia committed to continue the excellent work that the Dominican Republic has engaged in during the first semester of 2018, and to work diligently in ensuring that the regional strategy for sustainable tourism development and multi-destination tourism remains a priority in the region of SICA.