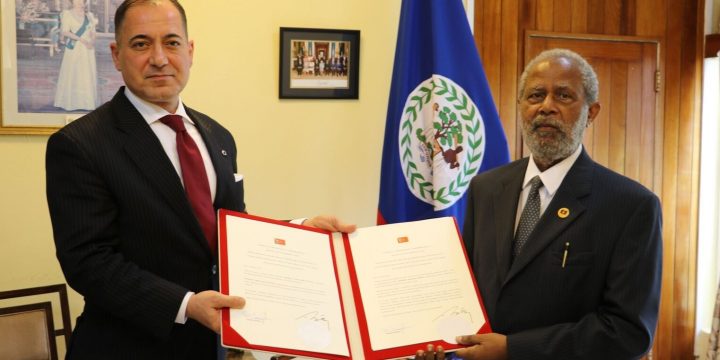 By BBN Staff: On Monday, Turkey’s Ambassador-designate to Belize H.E. Süleyman Gökçe presented his letters of credence to the Governor General of Belize H.E. Sir Colville Young at the Belize House in Belmopan.

In his meeting with Elrington, Ambassador Gökçe reaffirmed Turkey’s commitment to strengthening bilateral ties with Belize in all fields.

Since the establishment of diplomatic ties in November 1987, Belize and the Republic of Turkey have enjoyed cordial and friendly relations.

The Government of the Republic of Turkey supports Belize with institutional strengthening and capacity-building through infrastructural and technical assistance, as well as the provision of scholarships for higher learning for Belizeans, including short-term courses for public officers.

As a member of the Group of Friends of the Belize-Guatemala Transition Process, the Republic of Turkey has provided political and financial support to Belize and the Republic of Guatemala over the years through the Peace Fund of the Organization of American States (OAS).

Gökçe conveyed the support of the Government and People of the Republic of Turkey for the initiative undertaken by both governments to resolve Guatemala’s territorial, insular and maritime claim to Belize at the International Court of Justice (ICJ).

Gökçe further pledged a financial contribution for Belize’s public awareness and preparedness for the referendum on the question of referring Guatemala’s Claim to the ICJ.

Ambassador Gökçe congratulated Belize on the assumption of the Presidency Pro Tempore (PPT) of the Central American Integration System (SICA) for the second semester of 2018 and expressed his Government’s willingness to develop comprehensive cooperation with the SICA member states under Belize’s chairmanship.

Gökçe arrived in Belize on July 9, and departed the country on the same day.