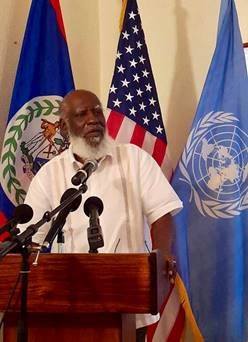 By BBN Staff:  Yesterday, the Belize Territorial Volunteers (BTV) issued a release condemning the statements made by Belize’s Foreign Affairs Minister, Wilfred Elrington to the media on Thursday, July 5, 2018.

BTV cites that at an event where the United States donated $500,000 to Belize’s public awareness campaign on the ICJ and Belize’s territorial dispute with Guatemala, Elrington stated  “…if you don’t say yes to the ICJ, you are crazy”.

The Foreign Affairs Minister further stated that it is only persons “in their right minds who would want to advocate for a yes vote.”

According to the BTV, the remarks by Elrington reflect the stance of the Government and are the latest example that the government has no intention to conduct a neutral and impartial public education program.

“The government has deliberately left Belizeans in the dark about what are the issues surrounding the ICJ and Guatemala’s position on the exact nature of their claim to more than half of our country,” the BTV said.

The BTV further added that it is the duty of the Government of Belize to ensure that Belizeans are fully informed on this all-important matter relating to the upcoming ICJ referendum which is now only nine months away.

“Such a referendum is the highest form of democracy in which an informed people express their will on the vital issue of Guatemala’s claim.”

The BTV assert that Elrington’s remarks are an attack on the Belizean people who are entitled to exercise their constitutional and democratic right to vote yes or no to the ICJ.

“It is not open to the Foreign Minister to belittle the democratic right of Belizeans should they choose to vote their conscience on such a vital issue. The remarks were insulting and degrading and were the opposite of what the government is paid to do. Which is to conduct a countrywide education campaign on all sides of the ICJ and Guatemalan issues,” the release further stated.

The BTV will now write to the United States Secretary of State and members of the United States Congress informing them that U.S. taxpayer’s dollars are being used to allow the Belize government to subvert the democratic right of the people of Belize to be properly educated in preparation for the upcoming ICJ referendum.

Furthermore, the organization urges Belizeans living abroad to email or write their Congress representatives to inform them that American tax dollars are being handed over to the government of Belize and it is not being used for the proper purpose.

The BTV also calls on all social partners in Belize to keep up their vigilance on the ICJ and referendum issues and to express their concerns over the failure of the Foreign Minister and his government to conduct an unbiased and impartial public education campaign.