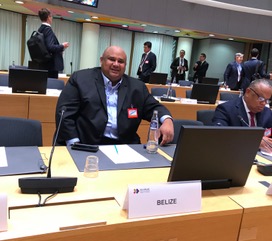 The Foreign Ministers of both regions came together to discuss their bi-regional relations under the theme “Building Bridges and Strengthening Our Partnership to Face Global Challenges.”

The dignitaries exchanged views concerning strengthening cooperation in global forums, the implementation of the 2030 Agenda, and inclusive and sustainable economies, trade, investment, and productivity.

The EU-CELAC Ministerial Meeting was followed by a Meeting between the EU High Representative for Foreign and Security Policy and Vice-President of the European Commission, Federica Mogherini and CARIFORUM Ministers of Foreign Affairs.

The meeting provided a forum for dialogue focused on issues of major interest for both regions, most notably on climate change and the Caribbean region’s vulnerability to natural disasters.

In his interventions at the aforementioned meetings, Peyrefitte thanked the EU and its member states for its longstanding partnership, particularly through development cooperation.

Peyrefitte further welcomed both regions’ participants to the EU-CELAC Citizen Security workshop, scheduled to be held in Belize later this year 2018.