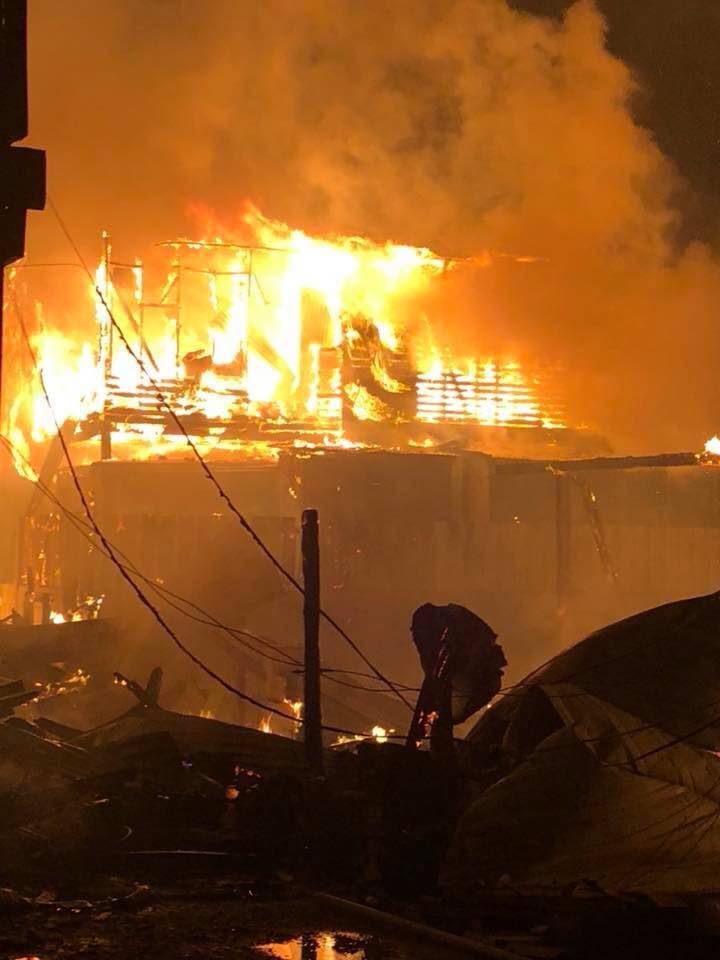 By Lisa Shoman: Yet again on Ambergris Caye, a blaze has destroyed homes and disrupted lives.

This time at least, loss of life has been spared; but about 75 residents of Boca Del Rio have been left homeless and dispossessed of worldly goods, irreplaceable personal mementos and have lost family treasures.

A quick scan of the news archives on San Pedro reveals that this terrible event is the third fire in as many months on Ambergris Caye.

The first of the incendiary trifecta was the terrible inferno that cost four precious lives in the Escalante Subdivision of south Ambergris, early on Tuesday, June 12th. David Nuñez and his son Samir Nuñez were badly injured, but did make it out, but his wife Clara Bacab-Nuñez and son Allan Nuñez (14) and daughter Mia Nuñez (6), and niece Sherilee Bacab (16) remained trapped inside the burning structure and perished. Tracy Cruz managed to escape from the lower flat through the bathroom window with her two young children.

The second was when a wooden structure that was the home of Felisa Aguirres, in the San Pablo Area, south of San Pedro Town, was gutted by a fire on Sunday, July 1, 2018. No one was in the house at the time of the fire, and no casualties were reported but a family was left homeless and Doña Licha lost her merchandise.

The latest fire at the Boca Del Rio, on August 4, yet again confirms the deadly combination on Ambergris Caye that dry conditions, high wind, inadequate equipment and wooden buildings jammed closely together are.

Ambergris Caye is an Island paradise. It is our “Isla Bonita” and some say, the Jewel in our Tourism crown.

But it hides an ugly secret. It is a fire hazard waiting to happen at any time.

On Ambergris, fire fighting equipment is limited. There is limited human capacity. Water sources are few. And there are dense population areas, built up of scrap wood, plywood and hope.

In the aftermath of the Escalante subdivision fire, in the San Pedro Sun, the National Fire Service chief, Orin Smith “explained why the fire trucks on the island had difficulty. He told the media that there are two units in San Pedro and combined they can carry approximately 700 gallons of water. “If you get on the scene and you use three lengths of hose, seventy millimeters by one hundred foot length, it takes thirty gallons to full one length of hose. That’s ninety gallons,” said Smith. “If you are using two branch pipe that discharges one hundred gallons per minute, that’s two hundred and ninety gallons per minute being discharged. Out of seven hundred gallons, you have at least just over two and a half minutes of firefighting before the trucks had to leave the scene to find water supply and that is what occurred.”

Two and a half minutes. Utterly unacceptable.

Ambergris Caye needs far more than “2 units” of equipment . You cannot give the San Pedro Fire Service “baaskit fu back waata” and expect them to put fires out with that. They need fire engines in excellent working condition, with enough working hoses and portable pumps.

The lesson to be learned – and learned quickly – is that Ambergris Caye desperately needs at least 3 substations. One in deep south San Pedro. One in San Pablo. One in North Ambergris. And those are in addition to one large central station in San Pedro Town.

We can’t wait until either more precious San Pedrano lives are lost, more homes destroyed or guests terribly affected and the tourism product is tarnished irreparably.

This situation is critical for the four time area representative and politician to worry about and address immediately. Promises do not fight fires.

It is far more important for Junior, than worrying about who has the temerity to challenge him.

In fact, all San Pedranos have the RIGHT to challenge him on this and other burning issues that affect their lives.