Julius Espat says ‘No to ICJ’ 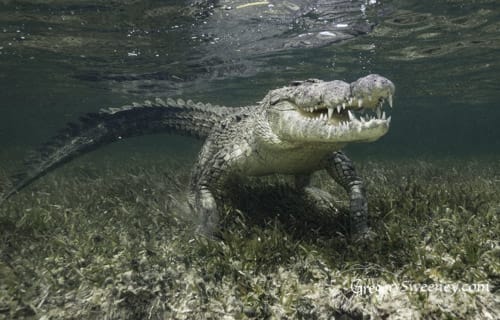 By BBN Staff: Authorities from several agencies are collaborating in an effort to extract and relocate a killer crocodile in the Banquitas area of Orange Walk after a video showing the croc attack and kill a dog was posted to Facebook on Monday. The video itself caused uproar on Facebook as many viewers called out the individuals who recorded the footage for animal cruelty.

A statement from the Banquitas House of Culture this morning said it has teamed up with the Belize Tourism Industry Association Orange Walk chapter, the Forestry Department, and the Crocodile Research Coalition to remove the crocodile that unfortunately grabbed and killed Bruno in the video. The Banquitas House of Culture said it is working to place strategic signs to make the public aware of crocodiles in the area.

“We are advising the general public to restrain from feeding the crocodiles as it pose a threat to everyone. We ask for you collaboration in ensuring the safety of everyone,” the statement said.

The video, which was posted to Facebook, showed Bruno running along a river bank while his presumed owners stand behind him filming. Seconds into the clip, the person recording zooms in on an approaching crocodile but doesn’t call out for Bruno until the predator is too close and it’s too late. Many people have spoken out and raised the issue of animal cruelty, saying the individuals should be held responsible.