Researchers to document the depths of Belize’s Blue Hole 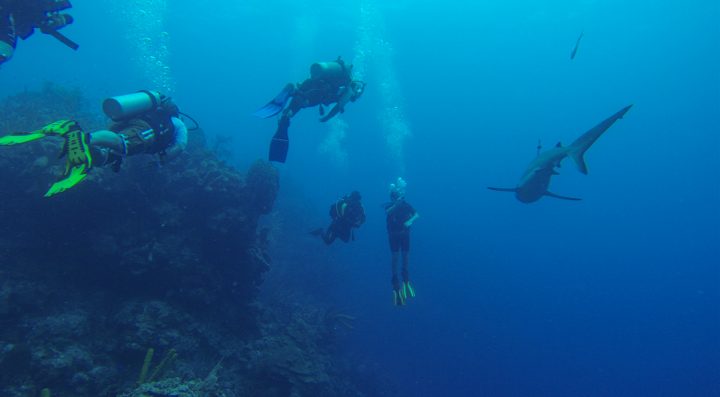 By BBN Staff: A team of researchers, including scientists, conservationists and filmmakers have announced a historic expedition to explore the bottom of Belize’s famed Blue Hole. The team includes famous entrepreneur and philanthropist, founder of the Virgin Group of companies and co-founder of Ocean Unite, Richard Branson; ocean conservationist and documentary filmmaker, Fabien Cousteau, whose grandfather, famed oceanic explorer Jacques Cousteau, proclaimed the Blue Hole to be one of the world’s best scuba-diving destinations; and submarine technology company, Aquatica Submarines.

Aquatica has enlisted a team of scientists, explorers and filmmakers to “share the beautiful mysteries that await at the bottom of Belize’s Blue Hole”. According to the release, multiple submersibles, developed by Aquatica, will descend to the bottom of the Blue Hole to collect scientific data, focusing on a complete sonar scan of the interior.

“Situated in the center of Lighthouse Reef off the coast of Belize, the Blue Hole is a giant marine sinkhole that is 1,043 ft (318 m) in diameter and 407 ft (124 m) deep. To put its size into perspective, the Blue Hole could easily swallow two entire Boeing 747s in one gulp, undiscoverable from the surface. The Blue Hole is a part of the larger Belize Barrier Reef Reserve System which is a World Heritage Site of the United Nations Educational, Scientific and Cultural Organization (UNESCO),” the release said.

In 1971, the site’s name was coined by legendary oceanic explorer and filmmaker Jacques Cousteau as one of the top five scuba diving sites in the world. In the same adventurous spirit as Cousteau, the Aquatica mission—which will be captured by a videographer who is also a marine biologist—is not just about feeding curiosity, but also about ocean education, conservation and scientific research.

Led by Harvey Flemming, a successful entrepreneur and adventurer, Vancouver, BC based Aquatica Submarines is an emerging and innovative company in the manned submersible technology space. The company’s Stingray 500 submarine will be one of the two submersibles that will venture to the bottom of the Blue Hole to explore its depths for the historic expedition. The expedition is set for Fall 2018, sometime between September and December.