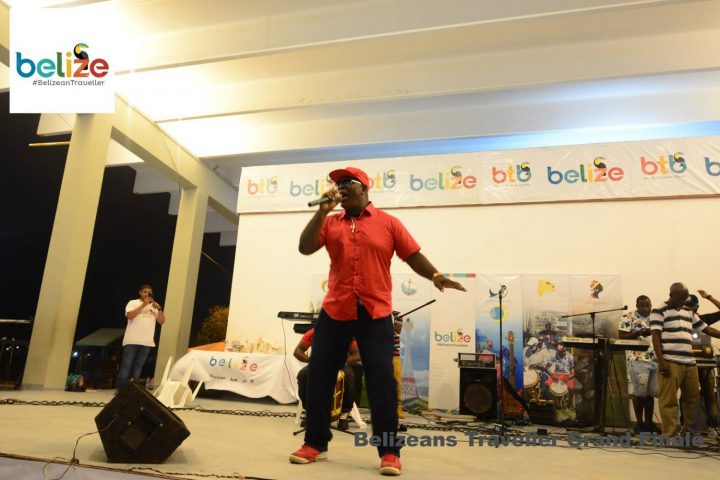 By BBN Staff:  The Belize Tourism Board’s (BTB) highly publicized Belizean Traveler Campaign, which encouraged Belizeans to be a traveler in their own country, came to a close on Saturday 25 August with a superb and dynamic grand finale at the BTL Park.

The conclusion of the campaign ended with numerous giveaways, live entertainment and the selection of winners of six grand vacation prizes worth $25,000.

Heavy dark clouds and the drizzle could not dampen the festive spirit during the grand finale with the crowd becoming highly euphoric as Belizean superstar entertainer, Supa G hit the stage.

Hosts Raphael Martinez and Ted Tejada kept the crowd’s eyes glued to their tickets as they announced the winners of the numerous prizes.

The event also included cultural presentations and entertainment by Kenny G and the New Creation Band, the Belize National Dance Company and the Barranco Garifuna Group. DigiNet also held a Party at the Park with numerous promotions and giveaways.

The highlight of the evening was the selection of the winners of the grand vacation prizes.

The winners of these prizes will be able to enjoy a dream vacation in any of Belize’s regional tourism regions.

The prizes include full paid accommodation, meals, transportation plus activities of the winner’s choice.

The BTB is now in the process of engaging the winners in discussions to develop their respective vacation package itineraries.

The Belizean Traveler campaign was carried out with the support of the Belize Hotel Association, which offered numerous discounts through its members during the entire campaign launched on August 1st.

The discounts continue until October 31st .

The campaign had as its main focus to create awareness of Belize’s six tourism regions and products to its residents and citizens; highlight what Belize has to offer as a perfect vacation paradise; allow the traveler to enjoy the scenery, their vacation and breathtaking memories; enjoy our unique Belizean culture and to promote educational opportunities among Belizeans so that they can learn about our history; promote Belize as a world class authentic Curious Place destination – be the envy of the world; offer Belizeans an opportunity for relaxation, invest in their family and take a well deserved summer break as well as to boost domestic tourism and allow Belizeans to enjoy attractive discounts being offered by various local resorts.

The campaign was carried out through an interactive live TV show entitled “The Belizean Traveler” on Love FM TV on Wednesday, August 8, 15 and 22.

During the show, the public was able to call in and answer a question and in addition to winning numerous BTB giveaways, winners were also able to participate in the grand raffle of the six big prizes.

Prior to the launching of the campaign, BTB implemented a series of DJ radio and television countrywide road shows to share the campaign concept with the public with the aim of generating their interest to participate in the campaign.

Throughout the month’s campaign, BTB was pleased to have created an increased awareness of Belize’s regions and products to its residents and citizens, highlighting the scenery and rich culture of a world class authentic destination – BELIZE, a curious place!

All Belizeans are encouraged to be a Belizean traveler.