Why Say No To ICJ At This Time

1 Hurricane and 2 storms being monitored in the Atlantic 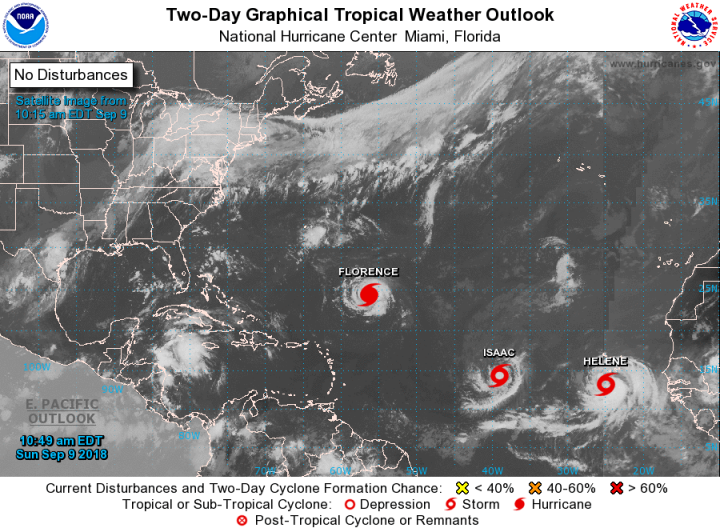 Hurricane Florence is centered over the Atlantic Ocean about 750 miles (1210 km) southeast of Bermuda.

Hurricane Florence is expected to intensify into a major hurricane by tomorrow.

Aircraft data indicate that maximum sustained winds have increased to near 75 mph (120 km/h) with higher gusts.

On the forecast track, the center of Florence will move over the southwestern Atlantic Ocean between Bermuda and the Bahamas Tuesday and Wednesday, and approach the southeastern U.S. coast on Thursday.

There is an increasing risk of two life-threatening impacts from Florence: storm surge at the coast and freshwater flooding from a prolonged heavy rainfall event inland.

Tropical Storms Isaac and Helen are also being closely monitored.

Tropical Storm Isaac is centered over the eastern tropical Atlantic Ocean about 1470 miles (2370 km) east of the Windward Islands. Isaac is moving toward the west near 9 mph (15 km/h) and is expected to accelerate during the next 36 hours.

A westward motion is forecast to continue through the end of the week, with Isaac expected to move across the Lesser Antilles and into the eastern Caribbean Sea on Thursday.

Maximum sustained winds have increased to near 65 mph (100 km/h) with higher gusts.

Additional strengthening is forecast, and Isaac is expected to become a hurricane later today or tonight.

Helen is moving toward the west near 13 mph (20 km/h), and this motion is expected to continue through today.  A turn toward the west-northwest is forecast to occur by Monday.

A Hurricane Watch and Tropical Storm Warning continues for the Cabo Verde islands of Santiago, Fogo, and Brava.

Tropical storm conditions are expected within portions of the warning area today, with hurricane conditions possible.

Maximum sustained winds are near 65 mph (100 km/h) with higher gusts.

Strengthening is forecast during the next 48 hours, and Helen is expected to become a hurricane later today.

Breaking Belize News will keep you updated with weather conditions.