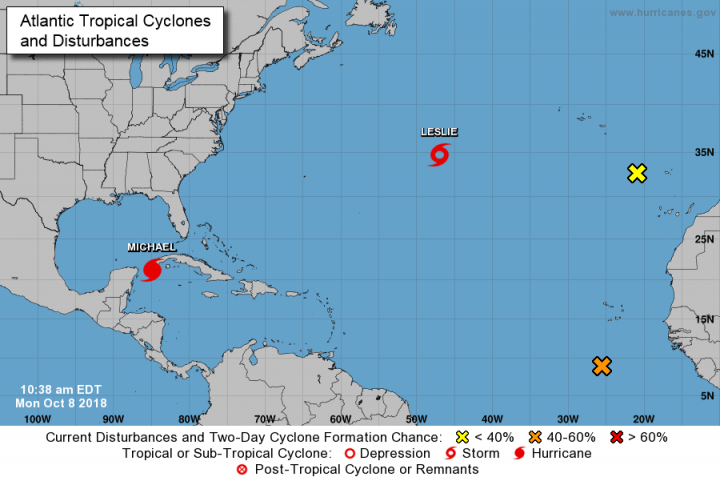 By BBN Staff: The National Hurricane center continues to monitor Hurricane Michael. Michael has strenghtened swiftly into a category 1 hurricane.

As of this morning, Michael was located near latitude 21.2 North, longitude 84.9 West.

Michael is moving toward the north near 7 miler per hour at a northward motion.

Michael is forecasted to continue to move northward near the western tip of Cuba this afternoon and into the southeastern Gulf of Mexico by tonight.

Michael will move across the eastern Gulf of Mexico Tuesday and Tuesday night, and is expected to move inland over the Florida Panhandle or Florida Big Bend area on Wednesday, and then move northeastward across the southeastern United States Wednesday night and Thursday.

Data from an Air Force Reserve Hurricane Hunter aircraft indicate that maximum sustained winds have increased to near 75 miles per hour with higher gusts.

Michael is forecasted to become a major hurricane by Tuesday or Tuesday night.

A Tropical Storm Warning is in effect for the coast of Mexico from Tulum to Cabo Catoche, including Cozumel

A Storm Surge Watch is in effect for Navarre Florida to Anna Maria Island Florida, including Tampa Bay.

A Hurricane Watch is in effect for Alabama-Florida border to Suwannee River Florida.