Tropical Storm Michael Forms, Could Threaten Gulf Coast as a Hurricane This Week 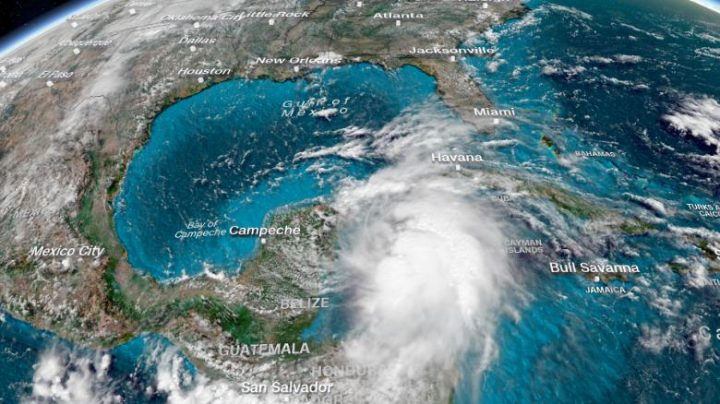 By BBN Staff:  The National Hurricane Center (NHC) says that Tropical Storm Michael was almost a hurricane early Monday and is expected to reach Category 2 or stronger as it churns over the Gulf of Mexico in the next couple of days.

According to the NHC, Michael is forecast to be near or at major hurricane strength when it reaches the northeastern Gulf of Mexico Tuesday night and Wednesday.

The storm is projected to hit somewhere in Florida on Wednesday or early Thursday.

This morning, Michael was about 120 miles east-northeast of Cozumel, Mexico, with maximum sustained winds of 70 mph. The storm was moving north at 7 mph.

The NHC says that the storm could produce a foot of rain in western Cuba, potentially triggering flash floods and mudslides in mountainous areas.

The storm will more than likely strengthen during the next few days with winds reaching a Category 2 hurricane, or possibly higher when it reaches the northeastern Gulf on Tuesday or Wednesday.

In Belize, the National Meteorological Service (NMS), posted on their website that Tropical Storm Michael was moving northward away from Belize and the 24-hour forecast calls for cloudy with sunny breaks this morning, becoming mostly cloudy this afternoon and tonight.

The NMS says that little to no rainfall is expected this morning, and then some showers, thunderstorms, and periods of rain will affect mainly inland, central and northern areas this afternoon and tonight.

The overall outlook was for some showers and thunderstorms which will develop inland on Tuesday afternoon and spread to coastal areas late Tuesday evening into Tuesday night.

Michael is the 13th named storm of the 2018 hurricane season.