Soldier loses an eye while on duty

PUP Leader: “We stand with the PSU and the land must be returned” 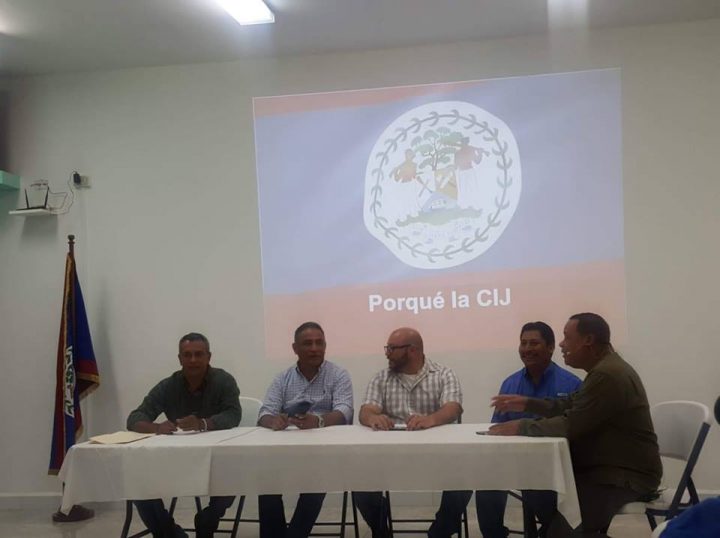 By BBN Staff: The People’s United Party (PUP) is hosting a countrywide consultation tour to listen to the concerns and opinions of Belizeans on the matter of taking Guatemala’s long-standing claim on Belize’s land, insular and maritime territories to the International Court of Justice (ICJ).

Last night the PUP held a forum that was open to supporters of their party and concerned residents at the Cayo Center for Employment Training in San Ignacio, Cayo District. Present at the forum were PUP standard bearers for Cayo North, Michel Chebat, Cayo Central, Alex Balona and Cayo Northeast Area representative, Orlando Habet.

Main presenter for the event was Ambassador Stuart Leslie. Leslie is a former member and vocal face of the Referendum Unit in Belize. He is a career diplomat with ample knowledge of Guatemala’s claim.

At the beginning of the presentation, attendees viewed a video explaining certain key points on ‘Why the ICJ’. Apart from the brief history and components of the court, the video highlighted speeches from Belize’s Prime Minister Dean Barrow and Opposition Leader John Briceno stating that the claim must be settled.

Furthermore, it presented attendees with information of previous compromis and agreements signed between Belize and Guatemalan governments under PUP and UDP administrations and explaining that negotiations and mediations have been exhausted.

“ On November 19, 2007, the Secretary General of the Organization of American States (OAS) wrote to the Prime Minister of Belize (PUP Government )and the President of Guatemala advising both countries that in an effort to find a final settlement to the claim, the countries must resort to a juridical solution,”  Leslie expounded.

The agreement was then concluded and signed by the United Democratic Party (UDP) government in 2008.

When asked by the audience, why Belize and Guatemala do not continue with negotiations, Leslie replied that negotiations have been exhausted and could not solve the claim since Guatemala always insisted on receiving land and Belize has always denied any land cessions.

Leslie also enlightened the guests with the 1859 boundary treaty that was signed by Great Britain and Guatemala, “ 85 years after Guatemala signed the 1859 Boundary treaty with Great Britain, they decided that the treaty is no longer valid. They are rejecting the 1859 treaty and in 1945 Guatemala included in their constitution, Belice es nuestro.”

Among the many questions posed at the forum, was:

Ambassador Leslie replied saying that if the ruling goes in favor of Belize and Guatemala does not comply, then Belize would go to the United Nations (UN) security council and inform them to take the appropriate measures since Guatemala is not abiding by the ruling.

Leslie stated that he has full confidence in Belize’s public officers to carry a balanced and fair referendum on April 10, 2019.

After the consultation was over, PUP Party Leader acknowledged all guests and their unison  for a ‘No ‘ vote to take the matter to the ICJ.

On April 10, 2019, Belizeans will be asked to vote in favor of or against taking Guatemala’s long-standing claim on Belize’s land, insular and maritime territories to the International Court of Justice for final settlement.

Belizeans will be asked to vote Yes or No to the following question:

Do you agree that any legal claim of Guatemala against Belize relating to land and insular territories and to any maritime areas pertaining to these territories should be submitted to the International Court of Justice for final settlement and that it determine finally the boundaries of the respective territories and areas of the Parties?