Police man shoots woman and shoots himself after

Horacio Franco in concert in Belize this Friday 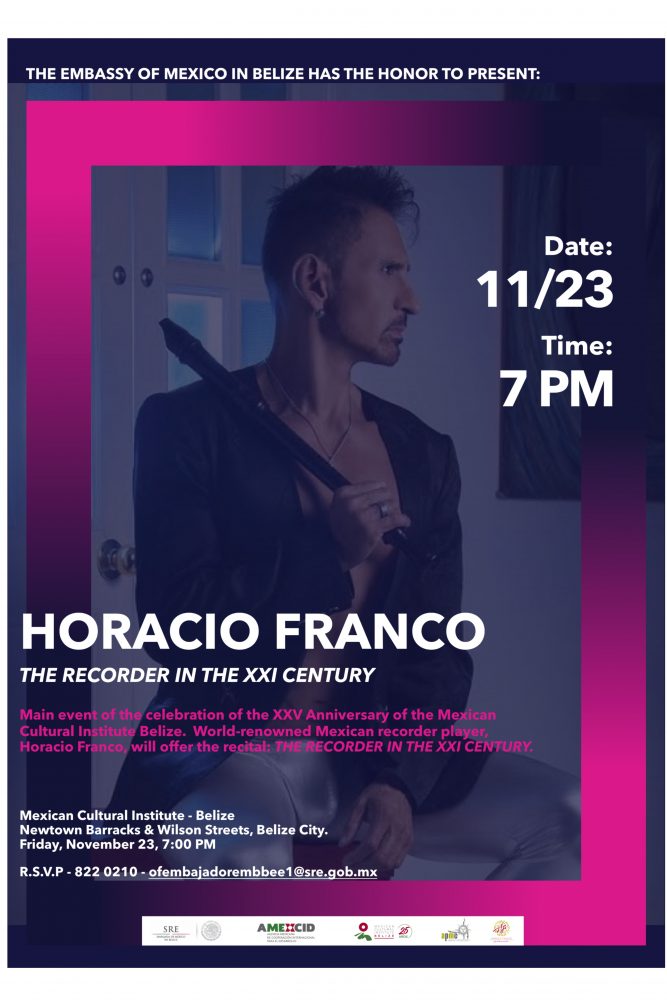 By BBN Staff: The Embassy of Mexico in Belize continues with the celebration of the 25th anniversary of the Mexican Cultural Institute in Belize.

On Friday, the embassy will present a concert with Horacio Franco: The Recorder in the XXI Century.

The concert is being featured as the main event of the celebration of the 25th Anniversary of the Mexican Cultural Institute in Belize.

Franco is considered one of the best recorder players of the world and his work ranges from the performance of his instrument, the flute, to the direction of orchestra and choirs such as the Cappella Barroca de México and the Madrigalistas de Bellas Artes.

In the span of his 40-year career, Franco has had extraordinary presentations as conductor and soloist with numerous orchestras such as the Academy of Saint Martin in the Fields, the City of Birmingham Orchestra, Philharmonia Baroque Orchestra, American Composers Orchestra, Berliner Symphoniker and Tokyo Solisten, among many others.

He has directed and performed in important venues such as in the Palace of Fine Arts in Mexico, the Carnegie Hall, the Berlin Philharmonic Hall, the Queen Elizabeth Hall, the Wigmore Hall, the Tokyo Bunka Kaikan and the Tzavta Hall in Tel Aviv, just to name a few.

Franco’s repertoire goes from the traditional forms of European Baroque through the popular dance danzón and contemporary music, as demonstrated in his latest H3A record, jazz with baroque flavor.

He is an authentic individual, rebellious, and eccentric, but at the same time humble and modest.

Franco is also a constant fighter for the rights of the people. A fierce activist in support of the cultural education of youth, he is in love with music and is rated as a leading artist for the Mexican people.